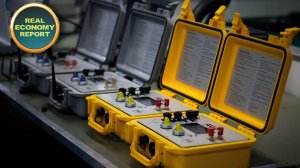 Mining explosives and blasting technology supplier BME is in the process of rolling out its new-generation electronic detonator system called AXXIS Titanium across the country and other key markets. Marleny Arnoldi visited the assembly site.

BME hails this system a significant advance for both the company and the country, as it improves South Africa’s competitiveness in the blasting space and boasts a product that is locally produced.

Only 30% of components for the AXXIS Titanium system and the smaller AXXIS Silver system are imported, and includes a specialised Swiss “e-board”, which helps make the product globally competitive.

The AXXIS Titanium is a culmination of the expertise the company has gathered from producing its predecessor, the GII. The new system offers improved accuracy, safety, usability and flexibility.

The system can manage 1 000 detonators per blasting box, doubling the capacity of the previous generation of detonators. Up to 20 blasting boxes can be linked and synchronised through hard wiring, enabling the initiation of up to 20 000 electronic detonators in a single blast.

The AXXIS Titanium has a 0.025% firing accuracy rate and has all commands built into a single logger device, including programming, scanning and testing.

Brits elaborates on the system’s firing, robustness and monitoring features.

The AXXIS Titanium speaks to doing the basics right – safety, productivity and ease of use – but also to the “new norms” of today, including modernisation, autonomy, sustainability and environmental, social and governance (or ESG) factors.

Hennecke unpacks some of the product’s value-add to a mine’s overall ESG credentials and how important accurate blasting is.

BME is in the process of rolling out the new system in South Africa, as well as the Australian and Indonesian markets; next up will be central Africa, the US and Canada, but the company is always open to exporting to other markets.