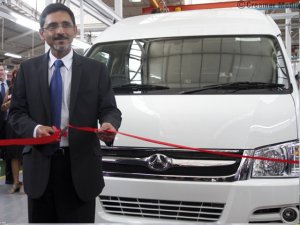 Beijing Automotive Works (BAW) was set to start local assembly of minibus taxis in South Africa in January, in a move that promised to create 469 jobs.

The local arm of the Chinese company, BAW South Africa (SA), on Tuesday cut the ribbon on its R200-million semi-knockdown (SKD) plant in Springs, on the East Rand, in a complex that previously produced telephones.

The renovated facility would have the capacity to produce 9 600 minibus taxis a year.

BAW’s parent company, Beijing Automotive Industry Holding Company (BAIC) would hold 51% in BAW SA, with the balance held by the Industrial Development Corporation (IDC) and James Chung and his family.

The IDC was contributing equity of R22.9-million, as well as debt facilities of up to R98.6-million.

BAW’s investment into the local taxi industry followed that of Toyota South Africa Motors (TSAM), which earlier this year restarted local taxi assembly on the back of government’s new incentive programme to localise truck, bus and minibus production in South Africa.

BAW SA sales and marketing head John Jessup indicated on Tuesday that the Chinese manufacturer indeed intended to go head to head with TSAM in the local minibus taxi market, where the Japanese manufacturer was currently the market leader with its Quantum product.

Jessup noted that the “market leader’s” product sold for around R300 000, which could escalate to R400 000 when interest was added to the price tag.

He said this hindered new entrepreneurs from entering the taxi market. High parts, service and replacement costs also ensured that vehicles were not serviced as often as they should be, which then jeopardised passenger safety, “perpetuating a vicious cycle”.

“We want to create new thinking in the taxi industry,” noted Jessup.

BAW SA’s new 009 model taxi would be sold in South Africa from next year, and would “match the market leader in every way”, he promised.

The 16-seater product, the Sasuka, would feature an antilock braking system, electronic brake-force distribution, increased space, as well as air-conditioning, with in-car television also under investigation.

More importantly, said Jessup, the 009 would be 25% to 30% cheaper than Toyota’s Quantum, with parts set to be priced 50% cheaper.

The vehicle would also be sold with a two-year, 200 000 km service plan included in the price. Services could be done at any dealer, or the owner could opt for an express one-hour service at a taxi rank.

BAW SA would also offer finance to prospective buyers, in partnership with Absa, in a move which Jessup said would increase finance approval rates for BAW products.

In addition, remanufactured vehicles – such as in the case of a repossessed taxi, for example – would be made available in a “new market space” of between R100 000 and R120 000, he added.

BAW SA had 25 dealers on board, said Jessup, while there were 5 service dealers in rural areas.

Minister of Economic Development Ebrahim Patel said at the plant opening on Tuesday that the BAW investment was “a concrete step in the move to reindustrialise South Africa”, and to “recapture the wealth created off a platform of the productive sectors of the economy”.

He noted that BAW had indicated that it was interested in expanding on its current investment to move from SKD production to completely knock-down production, which would mean greater use of local parts.

However, this expansion was dependent on sales volumes.

Patel said a Phase 2 expansion at the Springs site would mean another R2-billion investment, and 1 500 additional jobs.

There were around 200 000 minibus taxis on South Africa’s roads.

“The reality is that around two-thirds of South Africa’s taxi demand would be assembled in South Africa as from next year,” said Patel.

He also noted that government was hoping for increased “price competition” and innovation in the local minibus taxi market through the opening of the BAW SA plant.

“Taxis are a vital part of our public transport system. We require a market that makes affordable, safe and reliable vehicles.”

For BAW, increased taxi sales into South Africa would help BAIC to reach its goal of selling three-million vehicles a year by 2015.

Chinese embassy commercial counsellor Wei Jiang noted at the ribbon-cutting that trade between South Africa and China had increased by 37% from January to September this year compared with last year, to $44.7-billion.

He added that China had invested $8-billion in South Africa’s automotive, communications and financial markets by the end of 2011.

Jiang also noted that South Africa was “the perfect link-point to other countries on the continent”, as it offered good governance, rule of law and good infrastructure. He described China and South Africa’s relationship as one of “great friendship and political trust”.