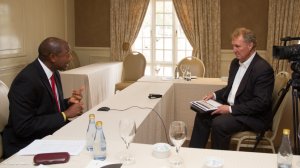 JOHANNESBURG (miningweekly.com) – Keep a look out for the five letters UHDMS, which stand for ultrahigh dense media separation.

The financial returns of these UHDMS projects are "very attractive”, he also told investors and analysts at last week’s presentation of financial results, which is why Kumba is carrying them out "on an accelerated basis”.

An existing modular UHDMS plant at Sishen has been doing so well, churning out between 2 000 t and 3 000 t of product a month, that another one is being commissioned at the Anglo American group company’s Kolomela iron-ore mine nearby, and a third is earmarked for siting right next to the existing Sishen plant.

This is material that does not attract any mining costs, with the retrofitting low cost by project standards.

“We’ve been working on this for years and now we’ve cracked the technology. What you are seeing now is the deployment of that technology,” says Mbazima in the attached video interview with Mining Weekly Online.

“That’s why we’re accelerating them,” he adds.

At its simplest, says Mbazima, that means prioritising value over volume.

Kumba’s approach over the medium term will thus be to deliver organic incremental production growth with the low capital requirements and short paybacks.

As the company’s first modular plant using UHDMS technology retreats only a portion of the available discard material, a second modular plant at Sishen will treat the balance.

Cracking the UHDMS code, plus the availability of spare DMS capacity, owing to lower mining volumes, has opened the way for more of the same.

The second modular plant at Sishen is expected to require a capital expenditure (capex) of between R400-million and R600-million for the processing of 0.7-million tonnes of low-grade material a year, the same processing rate of the new Kolomela plant, which is progressing towards commissioning in 2017 at a capex of R420-million. (Also watch attached Creamer Media video).