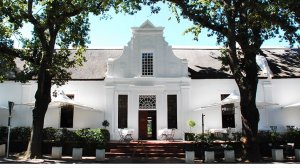 Atterbury’s decision to move its Western Cape head office was based primarily on its space requirements, but Atterbury Western Cape development head Gerrit van den Berg adds that, “it’s not often that you get the opportunity to own such a national treasure in the middle of Dorp street, Stellenbosch.”

He notes that La Gratitude presents an exciting opportunity to turn the “beautiful building into something that serves its community today”.

Originally built as a homestead by Dutch Reformed minister Reverend Meent Borcherds, the homestead was “aptly” named out of gratitude for the fertile land and its plentiful crops.

Van den Berg notes that Atterbury acquired the historic Cape Dutch manor house and renovated it. He stresses that, as a heritage building, very limited changes were made to the building’s exterior and while the facades have been maintained, no alterations were allowed.

The building, once home to a restaurant, is now being used for around 1 000 m2 of office space. It also accommodates a smaller, 200 m2 restaurant – Asta La Pasta.

Atterbury says that, following approval from Heritage Western Cape, work on the building’s interior started, with the first tenants occupying their new premises as of March this year.

Phase 2 of the renovation includes the building portion of the restaurant, as well as the exterior works, which recently got under way. This phase is set for completion in August.

“While planning our new office spaces, we quickly came to realise that there were a lot of smaller businesses around Stellenbosch with the same needs as ours – we have only five employees and can’t justify a receptionist and a full-time cleaner. We realised that this was a great opportunity to create the platform for a business community that could benefit from shared spaces, amenities and resources,” Van den Berg explains.

The new spaces at La Gratitude offer office rentals that include cleaning services, a receptionist, as well as a shared boardroom and breakaway areas.

“Although we will be making use of the latest technology, the building has a manor house theme, complete with antique furniture,” Van den Berg says. “It has been exciting for the team to work on this project together and we believe we have created something that adds real value to the area.”

He notes that the conversion from restaurant to office ensures less wear and tear on the building, while “restoring it to its former glory”.

“It is certainly fitting that in our twenty-fifth year of business, Atterbury is building on a great legacy and investing in La Gratitude to ensure that, like our business, it continues to remain vibrant and relevant in the future,” Van den Berg concludes.