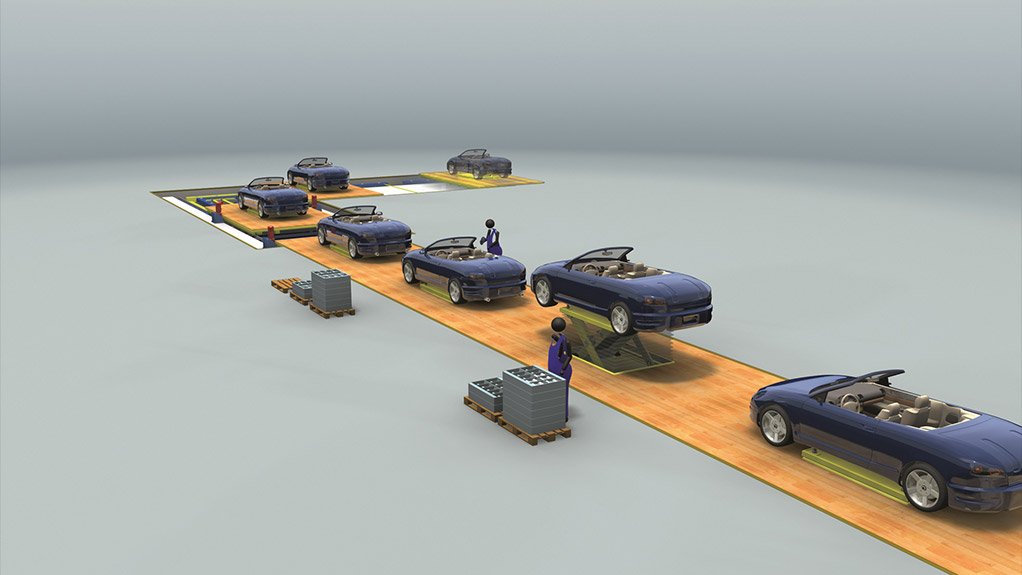 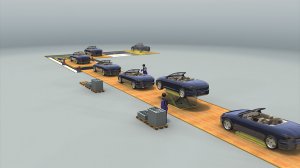 Contactless energy transfer involves electricity being transferred without contact from a fixed conductor to one or more mobile users such as the different stations in an assembly line. Developed at the company’s research and development department in Germany, the electromagnetic connection is made through an air gap, making it maintenance- and emissions-free.

The MOVITRANS installed was a 16 kW system to accommodate 38 carriages, with 18 on each of the two lines. Each carriage required 1.5 kW for the hoist, but at different times, while the old system only had 34 carriages.

“The replacement of the existing MOVITRANS system, originally installed in 2006, allows for increasing the production line for vehicles, as a further four skillets were added. “This will increase the number of stations on the assembly line and result in faster assembly of vehicles.”

La Cock explains that there are now effectively more stations manned by more employees on the line. “This means that the production line moves faster and there are more cars as output.”

He states that the system is ideal for mobile applications, and has been tested according to BGV B11 regulations, which provide guidelines on health-related risks in terms of electromagnetic fields. It is also suitable for equipment that is required to travel long distances at high speeds, and for applications in sensitive environments, such as wax and plants where fine dust is prevalent, and paint shops where chemicals are used, as well as in wet and damp environments.

La Cock highlights that the system does not require a cable to move the assembly line, which makes it easier to move vehicles as moving parts, and pieces of equipment remain on the vehicle during vehicle transfer.

The system also assists in identifying the carriage a vehicle is on in the assembly line.

The implementation of a conveyor system, such as the MOVITRANS system, in an automotive assembly line requires a custom drive concept that must meet the required load-bearing capacity, desired transport speed, existing space restrictions, and relevant conditions pertaining to the application.

The MOVIPRO SDC drive inverter is ideal for horizontal and vertical conveyor applications, as it integrates into all the necessary functions and allows for decentralised installation of up to 15 kW, making it suitable for the assembly line extension in Port Elizabeth.

La Cock emphasises that the system is suitable for installing autonomous drive sectors and networking them, owing to its robust design in terms of reliability and precise positioning requirements. Its modular, standardised design and configurable software components enables it to determine the integration of a variety of functions while reducing the intricacy of the machine or system.

La Cock says that there being 30 stations along the assembly line with different height requirements added to the complexity of the solution for the automotive manufacturer.

This means that a height table needed to be built into the system, providing flexibility in changing the heights of vehicles at different stations, as the requirement changes for each station, La Cock highlights.

“If you need to have a car positioned at a certain height, maybe to assemble the wheels or underbody, one would be able to change the height at which the car is positioned,” states La Cock.

SEW-EURODRIVE’s scope of work on the project included not only extending the assembly line, but also ensuring that the plant was up to date with the latest technology. This involved resetting all the MOVIPROs, extending a leaky WiFi cable, as well as replacing the MOVITRANS system with the latest version, which had functioned flawlessly to date.

While emerging digital technologies, such as those used at this assembly plant, are becoming increasingly prominent in the automotive industry, La Cock emphasises the challenge of keeping up to date with the latest technologies, stating that this is crucial in keeping up with competitors.

“We have a group of developers creating and designing all the applications and new technologies to be at the forefront of our competitors at all times. “We disseminate information regarding new products. The digital industry is completely taking over.”

SEW-EURODRIVE will attend the Africa Automation Fair 2019 from June 4 to 6 at the Ticketpro Dome in Northgate, Johannesburg. La Cock says this will be an ideal venue to showcase the company’s products for different industries, and its custom-made solutions for a variety of applications.

“Each plant has its unique way of assembling vehicles. In terms of this, SEW-EURODRIVE conducts an assessment and, based on that, we can supply a custom solution to the client,” he concludes.