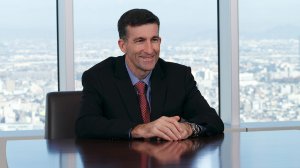 Toyota South Africa Motors (TSAM) on Friday announced that corporate administration senior VP Andrew Kirby had been appointed as executive VP and COO at the local arm of the Japanese vehicle manufacturer.

In his new position, Kirby would oversee all operational aspects of the company’s automotive business, from planning and production to sales and marketing.

“Andrew's multifaceted experience in the automotive industry in South Africa and abroad made him the ideal candidate for this role," noted Van Zyl in a statement.

Kirby had, in the past, been at the helm of TSAM’s sales and marketing division, before moving to Japan as Lexus marketing and planning GM.

Lexus is an affiliate of Toyota.

Upon his return to TSAM in July 2013, Kirby held the position of corporate administration senior VP.

His promotion follows in the wake of Van Zyl having stepped up the corporate ladder in March last year, when his portfolio as TSAM president was expanded to include Toyota Europe.

Van Zyl said, at the time, that he would, on a rotating basis, spend one week in Japan, one week in South Africa, and two weeks in Europe, where Toyota has eight manufacturing sites.