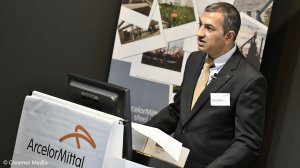 Following years of sustained losses, steel producer ArcelorMittal South Africa (AMSA) reported a full-year profit in 2018, on the back of a 12% rise in average realised prices and a 5% increase in sales volumes, supported by a 21% rise in export sales.

The company last reported a full-year profit in 2010.

AMSA’s 2018 results were also lifted by a R415-million profit on the disposal of the group’s 50% stake in Macsteel International Holdings (MIHBV) and by the fact that there was no repeat of a R2.6-billion impairment charge taken on property, plant and equipment in 2017.

The JSE-listed group sold its stake in MIHBV to Macsteel for $220-million, or about R3.2-billion. New CFO Desmond Maharaj said the proceeds from the sale contributed to reducing the company’s net borrowing position from R3.3-billion to R475-million.

CEO Kobus Verster indicated that no other assets had been identified as non-core and that the current focus at the group was to stablise production at levels higher than the 84% capacity utilisation achieved during 2018.

Previously, AMSA had indicated that it would consider selling its position in Consolidated Wire Industries (CWI). However, Verster said the group’s strategy to incorporate more downstram value-addting activities had been reaffirmed in the past few months and that it would instead focus on improving the performance of CWI.

The turnaround had been achieved despite weak demand for steel in South Africa, where overall demand fell by 4% and apparent steel consumption fell to a nine-year low.

The financial recovery was aided by higher realised steel prices resulting from stronger international prices and an increased sales volumes in 2018, despite the weakness evident in South Africa’s economy.

“We are also beginning to see the positive results from the collective efforts of AMSA management and employees to turn the business around,” Verster said.

AMSA has set a goal of reducing its production costs by $50/t by 2021, but Verster indicated that it is hoping to accelerate on that cost-saving schedule partly to offset the cost pressures it is facing from rising electricity and logistics costs.

The group expected domestic steel demand and exports to remain stable in the first half of 2019, cautioning that volatility in the rand/US dollar exchange rate would continue to have an impact on its results.