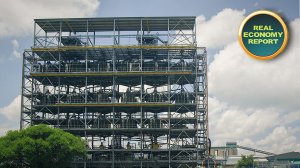 Dylan Slater:
The R474-million chrome recovery plant was commissioned in mid-2016, having entered formal operation in September, 2016 and will produce two grades of concentrated chromite, including a metallurgical grade and chemical grade. It uses a network of 300 spirals, which use the force of gravity to extract chromite from ore mined at the Tumela and Dishaba mines, both within the Amandelbult complex.

Dylan Slater:
Although chromite has always existed in the Upper Group 2 reef mined at the Amadelbult complex, the extraction of the material using the new recovery plant will further add value to Amplats’ existing basket of platinum group metals.

Dylan Slater:
The plant is designed to process about 700 000 t/y, but Amplats projects GM Etienne Espag says the plant will operate at between 600 000 t/y and 650 000 t/y. He runs us through the timeline of its construction