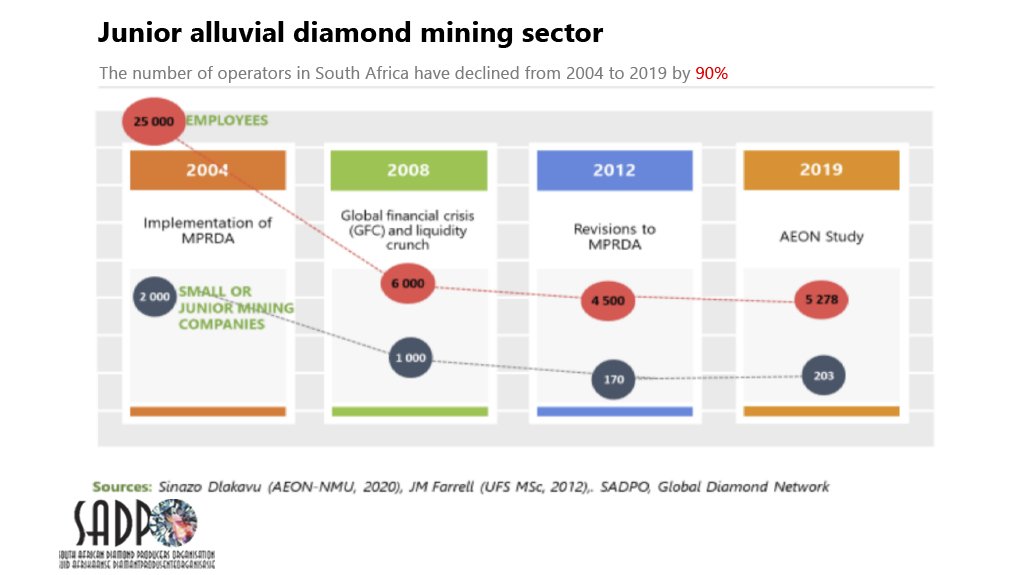 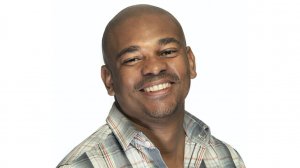 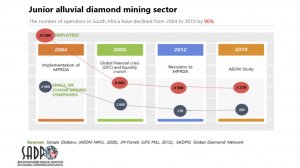 JOHANNESBURG (miningweekly.com) – The number of alluvial diamond operators is decreasing at an alarming rate.

What is also alarming is the decrease in prospecting applications and the rapid growth of illegal mining.

“We do not think we have all the answers, but we believe that by working together, the private sector and government, we can save this industry,” South African Diamond Producers Organisation (Sadpo) national executive committee member Amo Marengwa told Mining Weekly in a Zoom interview. Also taking part in the  interview were Sadpo chairperson Gert van Niekerk and Sadpo deputy chairperson Lyndon De Meillon, who outlined the rewards South Africa could potentially harvest with the right regulations and a lower cost of doing business. (Also watch attached Creamer Media video.)

“In South Africa, getting a right to mine is not an easy process. It’s very complicated, time-consuming and expensive,” said Marengwa, an alluvial diamond entrepreneur, who is the CEO and co-founder of Blue Banjo 3.

“In our case, my brothers and I applied for a right to mine using our own money and even put up some infrastructure to get going. Given our financial backgrounds, we do not have the financial muscle to grow the company. We’re unable to buy more machinery. Unfortunately, in our country, this is the reality.

“Emerging entrepreneurs do not have the resources to build sustainable companies, especially those that are based in the rural areas. The lack of finance and support forces many entrepreneurs to look for external help, meaning, for example, in my case, I had to look for partnerships, investors or any kind of help that could push he project along,” said Marengwa, adding that he had made unsuccessful approaches to the State-owned Industrial Development Corporation and a number of other developmental agencies.

“Unfortunately, in our country, exploration projects, especially alluvial diamond projects, are deemed too risky. There’s a lack of data and technical support from government institutions such as Mintek and the Council of Geoscience. Therefore, most of us cannot secure any investment.

“Much of these problems are the result of a poorly considered policy. In other words, we’re governed by the same mineral policy and regulations that were designed with only the large mining companies in mind. Our recommendations are based on developing a fit-for-purpose, policy and regulation framework, meaning changing the approach from a one-size-fits-all to a more inclusive approach,” said Marengwa, in presenting Sadpo’s eight-slide position paper on a South African artisanal and small-scale diamond mining policy framework.

“Our first recommendation is that to encourage new investment and particularly foreign investment into the industry and to also fast-track transformation, the process of applying for a mining right should be simplified and made cheaper. Our proposal is an adaptation of a tick-box application procedure, which will also help the department in granting licences quicker and more efficiently. To further simplify the process, a one-stop-shop system needs to be established, meaning I should be able to receive my mining right and water usage licence at the same place, at the same time.

“Our second recommendation is that, to encourage small miners to do business with black diamond dealers, we need to change the current requirement. Currently, dealers have to present proof that they have offered 15% of their total production to a beneficiation licence holder, before they are allowed to export their production – these are mostly the black diamond dealers. We propose that this should be decreased to 5%, as junior diamond miners cannot afford to beneficiate 15% of their production, as their cash flows are too tight. This implies that they sell their production locally, where they do not always get the best price. At 5%, they will make an effort to make stones available for local beneficiation as it is a much more achievable target in terms of their cash flows. Besides, this is something that I’ve always asked myself, where is government expecting the black dealers to get the money from to buy the diamonds. Yes, transformation is needed in this country, but for it to happen, resources must be committed for its implementation.

“Our third recommendation of making the policy and regulations more inclusive aims to decrease illegal mining. Our only option is to include these illegal operators into the legal and regulatory framework. To do this, we propose the introduction of three new types of licences. This includes a 5 ha licence, which, we expect, will create about ten jobs; a licence that covers up to 45 ha and employs no more than 25 people per shift; and finally, a licence that covers more than 45 ha, employing no more than 50 people per shift.

“Our fourth recommendation aims to enable the development of a sustainable model that will allow a continuous income stream from all the alluvial mining companies. In other words, we propose that a mine development fund should be created. The idea here is that the alluvial mining companies will then contribute a percentage of their sales into the fund rather than just focusing on the Triple BBBEE requirements. The contribution will then be used to fund the projects such as a mine, or investing in local projects to support communal needs that will increase jobs,” said Marengwa, who emphasised that in presenting recommendations to government officials, Sadpo is hoping for a constructive and collaborative engagement.

“First and foremost, I want to emphasise that Sadpo doesn’t profess to have all the answers and solutions but at the same time we are convinced that if we carry on the way things are, this side of the mining industry will ultimately implode and it is therefore our intention to come up with suggestions that we believe will prevent such an implosion and reverse the current tendency and become a vibrant, growing industry again,” said Van Niekerk.

“We also acknowledge the challenges that government is facing, mainly due to the wrongs of the past, but also, in my opinion, in the process of trying to right the wrongs, I think they made some honest mistakes in trying to achieve what is so necessary and what is so not negotiable.

“What Sadpo is doing will eventually lead to something that is practically implementable and which can enable us to return our industry to being a vibrant and growing industry. I talk specifically about the smaller side of the diamond industry. We are of the opinion that whatever we suggest must be commodity specific and therefore it is going to be a little bit of an issue for government to come up with specifically diamond regulations and therefore we also feel comfortable in asking for that in the sense that in the past there has been a separate diamond Act, whilst there is no other mineral in South Africa with that,” said Van Niekerk.

“Sadpo fully supports the aims of the Mining Charter,” said De Meillon. “However, due to the unique nature of especially the alluvial diamond deposits, we are proposing changes to the legislation specifically for the small and junior alluvial diamond mining companies that will allow us to still achieve, and in fact exceed, the goals of the Mining Charter, but at the same time grow and expand the industry.

“Due to the erratic, marginal and nomadic nature of the alluvial diamond mining industry, you cannot apply the same legislation that you would, for example, apply to a listed gold, iron-ore or, for that matter, kimberlite mine, to a small or junior alluvial diamond mine.

“History has shown that if you do that, you kill the industry, and we have independent reports to prove that,” De Meillon said.

“We still have an enormous alluvial diamond resource in South Africa – probably for another 100 years. This is not for large corporate companies as the risks are too high.  Exploration and junior mining are the future of mining in South Africa. It is no use for the policy makers of our country to make sweeping statements of how mining must benefit local communities, empower local entrepreneurs, grow local suppliers et cetera, if the rules within which we have to operate as junior miners makes it impossible to achieve these goals and, in the process, destroys the very companies that have to do the upliftment.

“Regulation and legislation should be written from the bottom upwards. We, as Sadpo, are making recommendations based on detailed studies of the industry that will allow the alluvial mining industry to thrive, drive local beneficiation, attract investment and ensure that local communities benefit sustainably, and that the industry will transform.

“None of this has happened in the past 20 years with the current legislation and it is time that we recognise this and change to a model that will achieve the aims and goals of the Charter in a sustainable way,” added De Meillon, an independent diamond producer and owner of Paleostone Mining, which has two operating alluvial diamond mines.

De Meillon is a geologist with an honours degree in geology and a master’s degree in oceanography. He has been in the diamond business for nearly three decades and assures Mining Weekly that South Africa’s globally unique and exceptional deposits can be successfully exploited with robust geological modelling, experience, low-cost operations and technology advances. But the red tape must be removed and legislation introduced to open the way for the country’s small and junior mining sector to create wealth and jobs.

The discovery of alluvial diamonds in the unique secondary deposits of the Middle Orange river downstream of Hopetown, in South Africa, in 1867, was the catalyst that initiated the development of the mining industry in Southern Africa. But compared with its heyday between the 1990s and early 2000s, today’s junior diamond mining sector is but a shadow of its former self, even though that need not be the case.