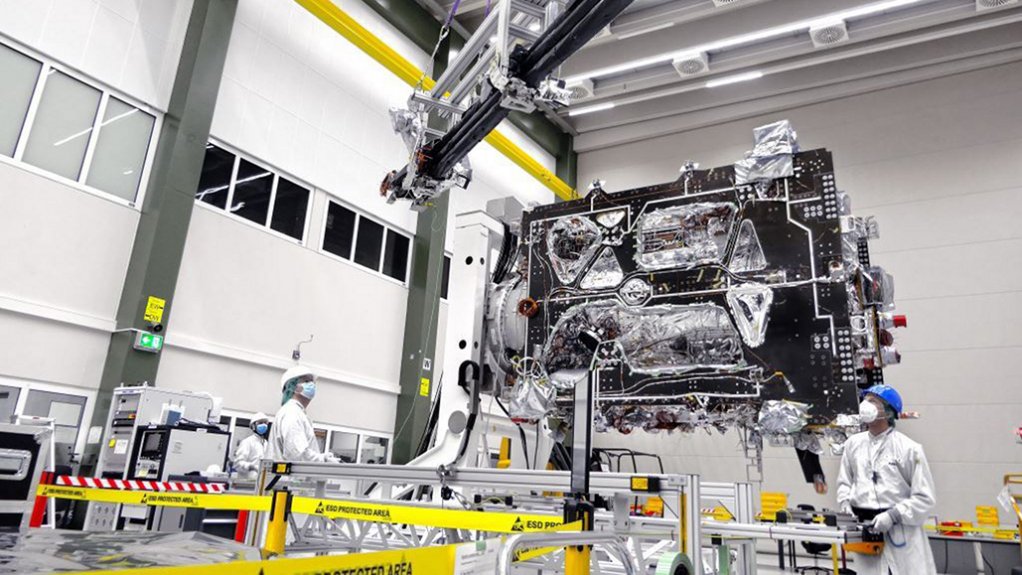 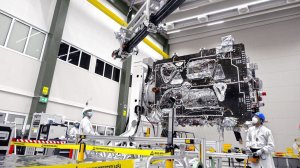 Photo by Airbus
The Magboom, visible at the top of the picture, suspended from a crane, is lowered towards the main body of JUICE

Airbus Defence and Space has reported that it has achieved the latest milestone in its assembly of the European Space Agency’s (ESA’s) Jupiter Icy Moons Explorer (JUICE) spacecraft. The space probe was fitted, at the company’s satellite integration centre at Friedrichshafen in Germany, with its magnetometer boom (Magboom).

The Magboom is manufactured from non-magnetic materials, including carbon fibre, bronze and a number of titanium and aluminium alloys. When deployed it will have a length of 10.6 m and a mass – including the sensors it carries – of 44 kg. It must be able to withstand temperatures ranging from –210 ˚C to +250 ˚C.

The Magboom mounts five scientific sensors that are magnetically sensitive and so need to be kept well away from the main body of the spacecraft. One of these is a magnetometer experiment called J-Mag, while the other four form a single experiment, known as Radio & Plasma Wave Investigation (RPWI).

JUICE will carry other experiments in its main body, for a total of ten. The others will include a camera, ice-penetrating radar, a laser altimeter, spectrometers, and a sub-millimetre wave instrument.

Jupiter is believed to have 79 moons, most of them small or very small. But four are decidedly large. Indeed, one of the them, Ganymede, is the largest moon in the entire solar system and is actually larger than the planet Mercury. It is also the only moon known with its own magnetic field. The other three of these ‘big four’ are Callisto, Europa and Io. Callisto, Europa and Ganymede are the icy moons. (Io is very different and is the most volcanically-active body in the solar system.)

Europa and Ganymede have water ice crusts with thick soft ice layers underneath. Europa is believed to have a subsurface water layer between its crust and the soft ice layer and Ganymede might also have one. Callisto is currently believed not to have such a feature, but JUICE should serve to confirm or refute these various hypotheses.

The spacecraft will be launched next year and reach the Jovian system in 2029. Once there, it will spend more than three years examining the giant planet and its icy moons. This will include nine months orbiting Ganymede. Airbus is the prime contractor for JUICE but the consortium it leads consists of more than 80 companies across Europe. ESA is totally separate from the European Union.