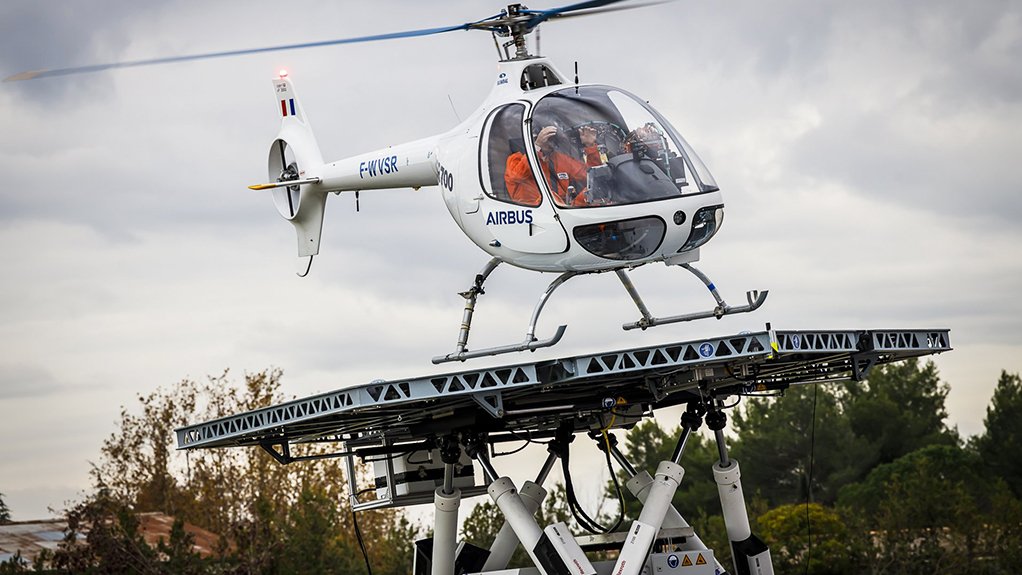 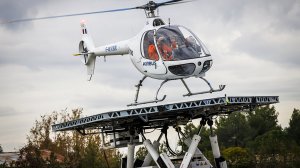 Europe-based aerospace and defence group Airbus has reported that its VSR700 optionally-piloted vehicle (OPV) helicopter has successfully made fully autonomous approaches and landings and subsequent take-offs from a platform that simulated the movement of ships at sea. The platform is mounted on hydraulic arms which move it to reproduce the pitching and rolling movements of a ship.

The VSR700 is based on the Hélicoptères Guimbal Cabri G2 light helicopter. For this test it carried a safety pilot, who kept his hands off the controls but who could have taken over control had any problems developed. These tests were the latest step in a programme that began in 2018 with a contract from France’s Armament General Administration to Airbus Helicopters and French shipbuilders Naval group to develop a tactical uncrewed aerial vehicle (UAV, also known as a drone) for the French Navy.

“A primary challenge for any naval drone is to approach ships in heavy seas as its landing pad moves toward or away from it, on rolling swells that reduce or lengthen the relative distance,” explained VSR700 programme head Nicolas Delmas. “Flying in such conditions, the difference of a few centimetres can determine the fate of an entire mission.”

There are two VSR700 helicopters now flying. One is the optionally-piloted helicopter used in the real-world simulation of deck landings, and the other is a pure UAV. The optionally-piloted version supports the technology re-risking phase of the programme by allowing the use of an onboard safety pilot. The ultimate aim of the project is the deployment of an operational naval tactical UAV at sea.

“Our programme has a step-by-step approach with quick development loops,” he elucidated. “This involves rapidly testing new functions with the OPV to get early feedback with a safety pilot onboard for emergencies, before putting these systems on the VSR700 [UAV] prototype. Whereas the VSR700 [UAV] prototype focuses on the development of vehicle performances, the OPV is primarily used to develop and facilitate the piloting laws and dedicated [autonomous take-off and landing] functions.”

The next major step in the programme will be the execution of actual sea trials using the VSR700 UAV prototype. These trials will fully test the UAV’s auto-pilot, flight control, navigation and positioning systems. A second VSR700 UAV prototype was ordered earlier this year, to allow the programme to move forward more rapidly. The VSR700 will be able to carry a full suite of high capability sensors, yet will be compact enough to be embarked on destroyers and frigates alongside (and not in place) of crewed helicopters. It also has the longest endurance of any vertical take-off and landing UAV in the 500 kg to 1 000 kg class.