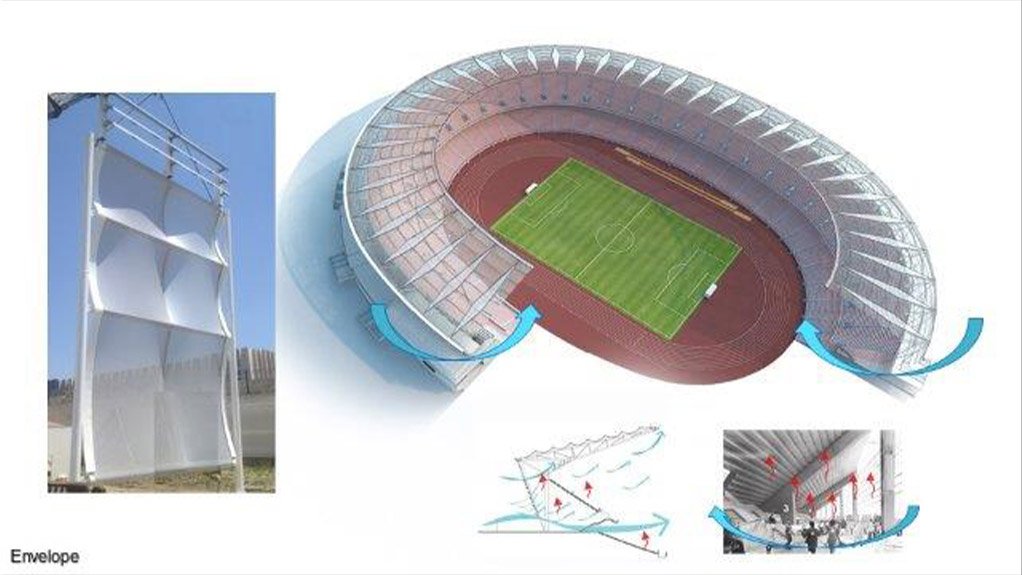 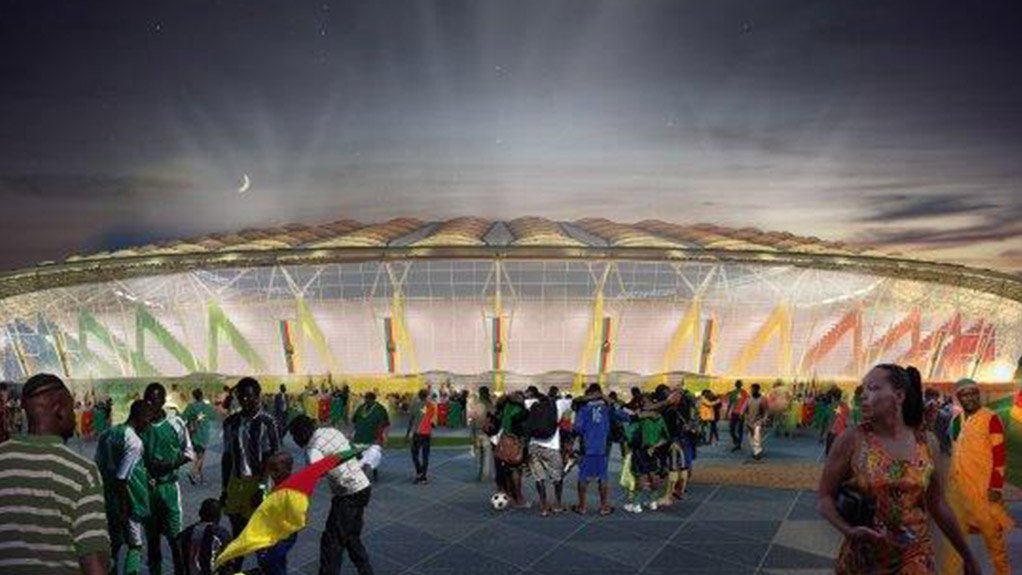 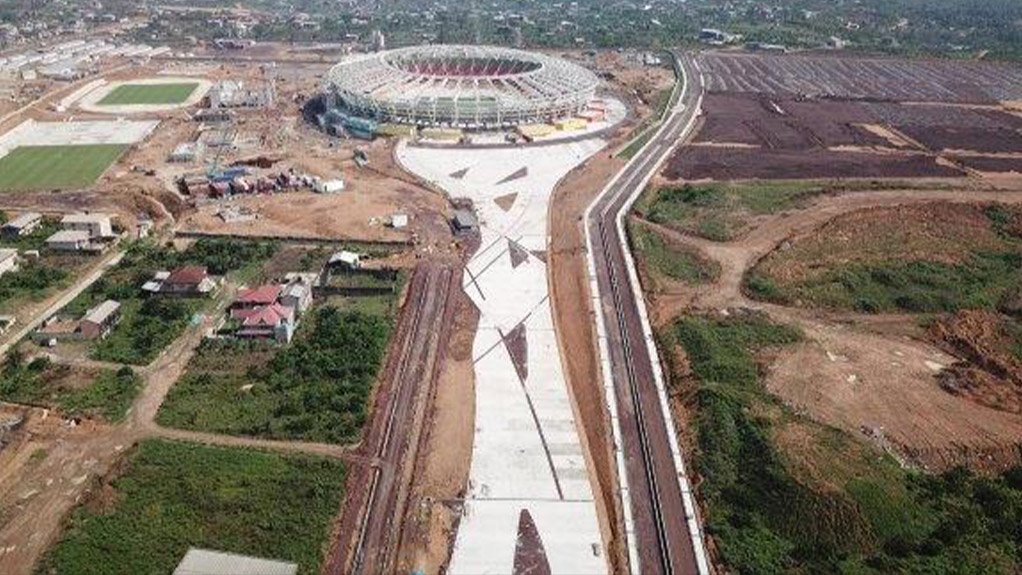 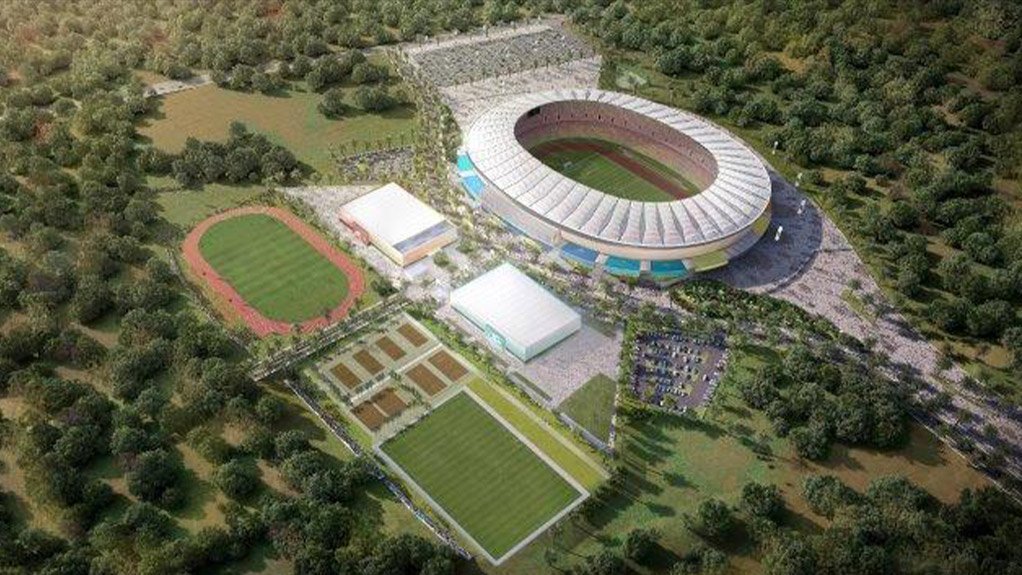 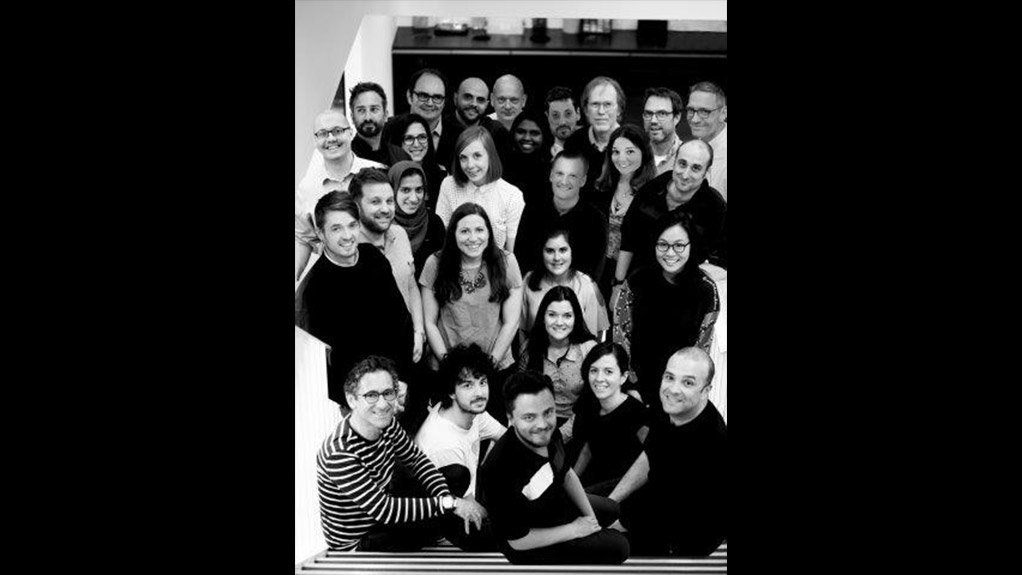 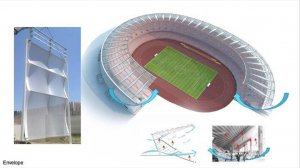 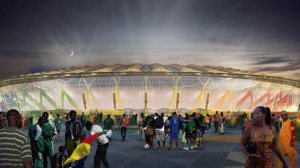 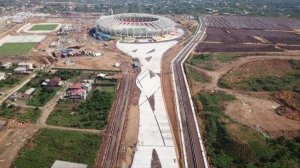 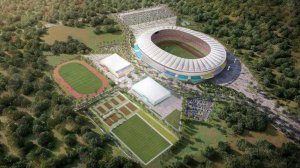 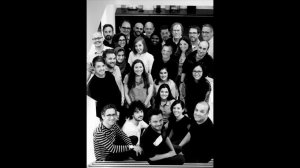 An innovative design-and-build solution for the Japoma Sports Complex in Douala, Cameroon has seen integrated infrastructure delivery company AECOM slash two years off the traditional timeframe for such a mammoth project.

The Japoma Sports Complex consists of a 50 000-seat multi-sport stadium, an aquatics centre with an Olympic-sized pool, a 2 000-seat multi-sport hall, outdoor training facilities, and transport hubs and site infrastructure. Ground was broken in 2017, with the formal opening anticipated in June.

AECOM’s scope of work encompassed a comprehensive scheme design for all engineering and architectural services, including masterplanning, and a design guardianship role as the project moved into production on-site.

“Our role evolved into Technical Advisor, including support on matters of sequencing and construction programme, which had an unmissable deadline,” Project Director and Structural Lead Jon Leach explains.

“It is a landmark project that demonstrates what can be done,” Structural Engineer Adrian Armstrong comments. From a blank slate with no masterplan in place to a fully operational stadium takes at least three to four years. However, the original timeframe was even tighter, with practical completion aimed for by October 2018.

Adding to the complexity was the fact that the bulk of the labour, materials, and elements had to be imported from main contractor Yenigün’s home country of Turkey. Thus, shipping delivery lead times required precise planning and logistics.

Constraints faced in this regard meant that many of the early trades were eventually carried out on-site. A batch plant produced readymix concrete for all of the precast elements to be cast on-site which, in turn, required a massive production yard for storage and handling.

Specialist items such as metal and steelwork were manufactured abroad and shipped over in containers, a process that could take up to three months. Hence it was critical to look at the role of materials and technology in accelerating the design process.

The simple design that AECOM came up with focused most of the services and accommodation in the West Stand, and an open concourse structure with limited envelope and building services in the other areas. Key to this structure was the double-spaced grid.

Armstrong elaborates: “A traditional stadium has double the number of columns than we ended up with on this concourse. This, of course, impacts on the façade and the overall architectural look and feel. It also meant that many of the larger elements could be prefabricated in fewer components to facilitate shipping.”

An initial review in conjunction with the contractor determined the cranage that was available, with this feeding into the design. “We worked closely with Yenigün from day one. Both teams visited London and Ankara respectively, with daily photographs and drone videos a vital part of our Technical Advisor role,” Armstrong reflects.

The use of visual communications to bridge three different countries and languages on such a fast-track project ensured that programme-critical decisions could be made in a quick and informed manner. Virtual Reality (VR) was used extensively throughout the design process.

“Our advice and opinions at the outset allowed us to propose a feasible design very quickly. There was a watershed moment with Yenigün when it was shown VR visualisations to demonstrate the look and feel of the double-grid spacing, and how this impacted the constructability. They realised we were completely on their side, and not just attempting an iconic piece of architecture. Our design was functional and buildable, but also very striking,” Armstrong concurs.

The stadium sets new standards for the region. It is a modern stadium, fully compliant with FIFA and IAAF requirements, with high-quality IT and communication systems, LED floodlighting, media and broadcast facilities and audio-visual provisions. Nevertheless, the design was based on the fact that this had to be a low-tech, easy-to-operate and maintain stadium.

The porous façade allows for natural ventilation, while also providing shelter from the heavy seasonal rainfall, a key factor in the design. AECOM Lead Architect Luciano Di Domenico explains that the façade was inspired by one of the most familiar objects from daily life in Cameroon, namely a coiled basket.

The delicate translucent wire construction of the stadium envelope and roof echo the flow of the basket’s weave. The main envelope is surrounded by stadium facilities in the shape of pods that also mirror a basket’s colourful, pattern-rich beadwork. These pods contain all of the attendant catering and concessionary facilities.

The use of clear visual representation fed into the finished building as well as the design process, with the use of colour being a key aspect of the wayfinding strategy and spectator safety, as well as the architectural language of the building.

As a way of embedding the stadium into the local culture, AECOM’s design allows for the pods to be redecorated periodically by local artists through competitions hosted by the Local Centre of Arts, making Japoma Stadium not only a centre for sport but also for local arts and culture. The art installations will support the stadium legacy alongside restaurants and bars underpinning the socio-economic sustainability of the project.

AECOM has considerable experience in stadium design-and-build, including the 2010 FIFA Soccer World Cup in South Africa. Indeed, the expertise of the South African team was called upon for the pitch design and drainage criteria at Japoma.

“The main reason we were awarded the stadium was our track record in multi-disciplinary projects, which combines design and engineering, managing all the attendant risk for the client, and providing a single point of contact or interface,” Armstrong highlights.

Leach concludes: “By the time piling commenced on-site in April 2017, it was a mere eight weeks after commencing the masterplan and locating the stadium on the site. That is as a result of the combination of our experience, knowing how to plan for such a project, having a team with strong leadership at its helm, making best use of technology for design and communication, and then thinking ahead all of the time as to how it had to be built.”