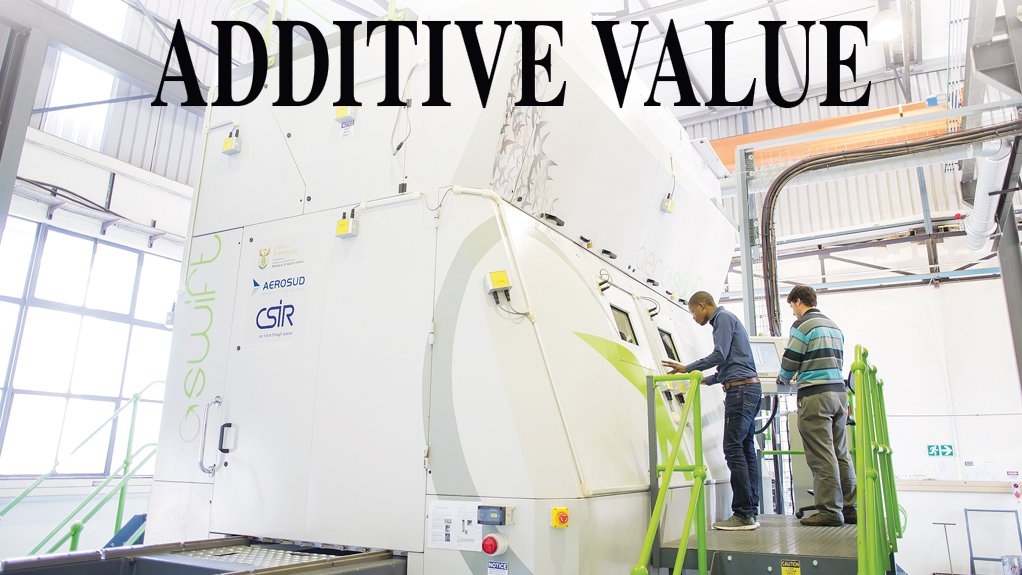 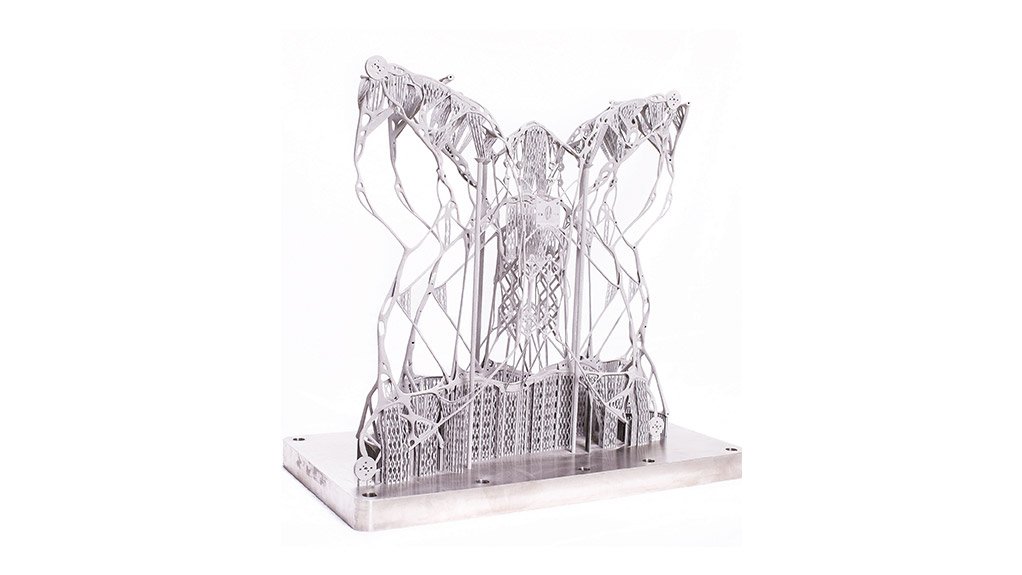 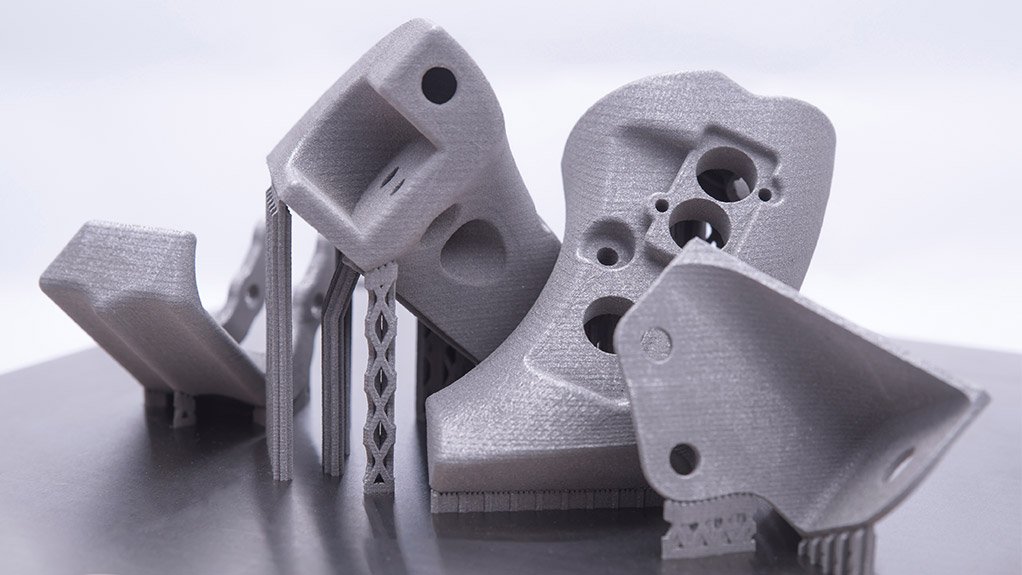 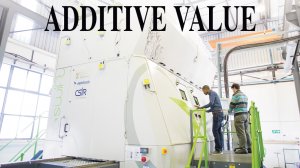 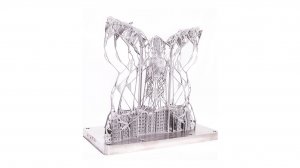 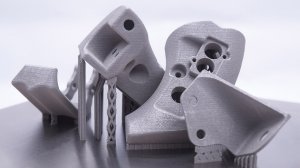 The global takeoff of additive manufacturing (AM, popularly called three-dimensional, or 3D, printing), it is now apparent, took place some six years ago. “[The year] 2012 was a turning point in AM globally,” consultancy Wohlers Associates president Terry Wohlers tells Engineering News. “The technology really gained attention, investment and traction, in comparison to what had been the case previously.”

The global AM sector grew at an annual average rate of 24.9% over the four years from 2013 to 2017, he notes. The total publicly available value of the sector was $7.34-billion last year (‘publicly available’ because this total excludes the value of parts made, using AM, by many manufacturers, because such data is difficult to obtain; the true total value is thus much higher).

In addition, many major manufacturers now make use of AM to rapidly produce prototypes of new products. The simple cash value of such work might be low, but its importance for the companies concerned is huge.

Moreover, there is now a much wider range of materials that can be used as feedstock for AM. This is the result of the development of AM machines and techniques, which are more ‘open’ or agnostic in terms of the materials they can handle. Whereas, once AM machines could only be used with certain plastics (polymers) and titanium and certain titanium alloy powders, today a much wider range of both plastics and metals can be employed.

Regarding plastics, some photopolymers are now being used, as well as a wider range of thermoplastics. Carbon composites are also being used, but nylon is especially popular. The range of metals employed in AM, usually in powder form (but some in wire form), is now quite extensive. In addition to titanium and titanium alloys, these include stainless steel and tool steel, cobalt-chrome alloy, and nickel-based alloys (especially Inconel). And now precious metals are also being employed – gold, silver and platinum. There is a platinum AM project currently being developed in South Africa, he points out.

“The range of applications for AM is getting ever wider,” highlights Wohlers. “This is because the costs of AM are being driven relentlessly downward. The costs of both machines and materials are much lower than they used to be. However, industrial-scale machinery and materials are still expensive. Some materials for industrial-scale AM can be 50 times more expensive than the equivalent materials for conventional manufacturing. Costs are coming down, but not as fast as many would like.”

Other low-hanging fruit is provided by consumer products, like jewellery. A recent development, with much promise, is using AM to produce customised footwear for individuals. And a consumer product AM is now being used to mass-produce is, oddly enough, a mascara application stick. “AM also allows the personalisation of products for individual customers.”

Although the automotive industry has used AM for years, it has done so in only niche applications, such as prototyping and the production of some small parts. The sector has not, as yet, made any substantial use of the technology. “But, once they do adopt AM, it will drive down the costs considerably,” he cites. “And Daimler is now starting to use AM to manufacture parts for [its] trucks to avoid having to maintain spares stockpiles in warehouses – the ‘print on demand’ concept. Once this moves to cars, it should have a big impact.”

For the near future – the next two to five years – Wohlers expects the price of metal AM machines to decline significantly, owing to greater competition in the AM machinery production sector. “With reduced cost, it will be possible to affordably three-dimensionally print light fittings, wall hangings, art works – even guitars. This can already be done, but the products are very expensive. Another potentially big market will be low-volume special event corporate give-aways, where AM will enable a company to give each of its guests personalised gifts.

“It’s very exciting to be part of this,” he enthuses. “There is something new almost every day. AM is dominated by young researchers. Putting AM with computer design softwares allows us to learn from nature – complex, lightweight, strong structures, such as found in the bone structures of birds. Biomimicry is a real opportunity and the next frontier!”

AM has been practised in South Africa for quite some time now, points out Rapid Product Development Association of South Africa (Rapdasa) Management Committee member and ADC Aeroswift programme manager Marius Vermeulen. Rapdasa itself was set up 19 years ago, and has steadily expanded in both numbers and in terms of sectors covered. “The Rapdasa Conference is growing quite rapidly – there were more than 200 delegates this year. Quite a lot of companies were involved. It has grown from a very academic event to one now involving industry, which is starting to use AM for their applications as well,” he notes. “South Africa is doing fairly well in terms of development in AM, in the fields of both polymers and metals; there are quite a wide range of technologies that we are involved in,” he reports.

The country has a number of AM research and development (R&D) centres at various universities and institutes. The Central University of Technology’s (CUT’s) Centre for Rapid Prototyping and Manufacturing (CRPM) is heavily involved with the medical industry. “They are highly advanced and have done dozens of titanium implants for patients.” The Vaal University of Technology has an important AM centre looking at tooling applications, shoe manufacture and a number of other applications. Stellenbosch University is busy with a number of metal AM technologies.

“And there are a lot of AM machines in the wider industry these days – some in the metals industry and a lot in the polymers industry,” he observes. “These range from very low cost machines to the very high end machines supplying to the medical and aerospace industries. So it’s a very lively industry in South Africa.

“I think, as with a lot of things in South Africa, we have limited resources, but I also think that the industry is using these resources very well,” he affirms. “We get a lot of support from the Department of Science and Technology (DST), which assists us in the development of machines and processes on the R&D side.”

On the industrial side, Lonmin is investing significantly in AM in South Africa. The platinum mining group is developing a process to produce platinum powder and then use this to manufacture jewellery and medical and industrial products. And there is the Aeroswift programme, which gave rise to the ADC Aeroswift company, in which Vermeulen is involved. This programme saw the development, in South Africa, of the world’s biggest and fastest metal AM powder bed machine, which is now the central asset of the company. “We are now going into the industrialisation phase and starting to ramp up,” he reports.

“There are a number of areas where South Africa is world leading in very niche AM application areas and where we believe there is international value that we can pull from this industry,” highlights Vermeulen.

The CUT CRPM, in Bloemfontein, in the Free State province, is the only ISO13485-certified medical implants AM facility in Africa. “Naturally, our focus is on medical product development, but we are also active in other sectors, including automotive and aerospace,” explains CRPM director Gerrie Booysen. “We’ve been going for 21 years now. We started with preplanning medical models in 1999, but the first actual implant was done in 2009.”

Perhaps ironically, that first South African developed and made medical implant went into a patient in the UK. At that time, South African hospitals were still somewhat uncertain about AM-produced titanium implants, whereas their UK counterparts already had some experience in this field. This particular implant was developed in a joint project between the CRPM, the University of Wales (which provided the design) and a Welsh hospital.

“Today, we do a mixture of generic medical implant manufacturing and patient-specific, load-bearing complex implants, each of which is a one-off,” he reports. “Generic items include spinal cages, which we manufacture in the hundreds. We are a subcontractor in this business, which helps keep our expensive AM machines commercially viable.

“For the future, a DST Chair in Innovation and Commercialisation of AM was recently created at CUT, with the support of the DST and the Manufacturing, Engineering and Related Services Sector Education and Training Authority,” he points out. “One of the functions of the new DST chair is to help create an AM commercialisation and innovation vision for the future of the centre and of AM in the country as a whole.”

The CRPM currently has ten AM machines, making it one of the best equipped AM centres in the southern hemisphere. In addition to developing medical devices, including implants and prostheses, it undertakes rapid prototyping, rapid tooling and rapid manufacturing.

• The 2018 Rapdasa Conference took place in Johannesburg last month. Wohlers delivered one of the keynote addresses at the conference, while Booysen made a presentation.