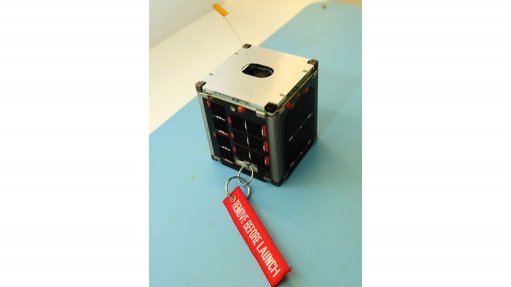 South Africa’s first CubeSat, ZACube-1, is scheduled for launch from Russia’s Yasny launch base on a RS-20B Dnepr rocket at 09:10 South African time on November 21, the Department of Science and Technology (DST) announced on Tuesday evening. Yasny is located in Russia’s Orenburg oblast (province).

“The launch of CubeSat is proof of the skills and the facilities we are gradually developing in the country to ensure space science and technology benefits every citizen of South Africa,” affirmed Science and Technology Minister Derek Hanekom. ZACube-1 has been funded by the DST and developed by the French South African Institute of Technology (F’SATI) at the Cape Peninsula University of Technology (CPUT).

The tiny spacecraft measures 10 cm x 10 cm x 10 cm and has a mass of 1.2 kg. Despite its minute size, it has a serious scientific mission – it is fitted with a high frequency radio beacon that will be used by the South African National Space Agency’s (Sansa’s) Space Science Directorate to analyse the propagation of radio waves through the ionosphere. This will form part of the directorate’s research into space weather.

In South Africa’s national register of space assets, the CubeSat is designated ZA-003. This follows in sequence from SunSat (ZA-001) and Sumbandila (ZA-002). It will be controlled from a ground control station at CPUT’s Bellville campus, while the signals from the radio beacon will be received by seven antennas, spread over 100 m2, at Sansa’s Hermanus facility.

The CubeSat will orbit the Earth 15 times a day, at an altitude of 600 km. It is expected to travel nearly six-billion kilometres before it re-enters the Earth’s atmosphere.

ZACube-1 is a product of the F’SATI Cubesat programme at CPUT, in collaboration with Sansa, and was designed and built by CPUT postgraduate students. More than 40 postgraduates have been involved in the project, their work amounting to more than 30 000 hours. Although small, the spacecraft contains 4 000 electronic components, plus a computer.

The CubeSat programme provides practical training in high technology and applied research. “This approach offers our students a unique learning experience and prepares them very well to participate in the South African space industry,” stated F’SATI director Professor Robert van Zyl. The programme was set up in 2009 and so far has graduated 32 Master’s students and provided internships to 15 of these graduates, as engineers-in-training. The total number of F’SATI alumni at CPUT is now 42.

The concept of the CubeSat was developed in the US by two California universities (Stanford and California Polytechnic State) in 1999.