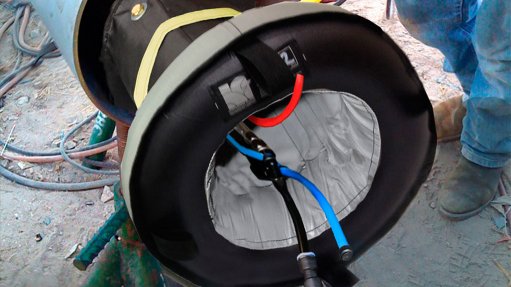 Time is money and waiting for pipe joints to be purged ready for welding can take anything up to four hours, depending on the diameter of the pipe being welding and the method chosen for purging. Huntingdon Fusion Techniques, HFT®‘s innovative QuickPurge® System dramatically reduces waiting times, producing zero colour welds and no loss of corrosion resistance caused by oxidation. Ron Sewell, Chairman for HFT® said: “A 36” diameter stainless steel pipe for example can be purged down to 100 parts per million (ppm) of oxygen in under 32 minutes. Compare this with purging using foam dams that will outgas heavily into the weld zone and will take hours, not a few minutes.

High speed pipe purging system QuickPurge® is leading the way in the field of purging tube, pipe and pipeline joints over 6” diameter, where oxygen levels are required to be as low as 10 (ppm) or less.”

Using IntaCal® combined with the integrated PurgeGate® device makes it possible to safely inflate the dams with argon gas and for purging the space between the dams where the weld joint is located. It is almost impossible for the inflatable dams to burst as a result of undue pressure or accidental flow increase.

All systems are manufactured as standard with a hose for connecting a Weld Purge Monitor® to, which can read oxygen levels down to 10 ppm.

Materials chosen for QuickPurge® are such that they are resistant to the higher weld heat present and at the same time exhibiting lower outgassing rates to prevent weld contamination. For heat-treated chrome steel pipe joints, HFT® manufactures the special HotPurge® range for the higher and longer temperature exposure requirements.

QuickPurge® Systems are manufactured for pipe diameters from 6 to 96 inches (150 to 2,440 mm) and are equipped with a “QuickFit” coupling for the purge / inflation hose. The “QuickFit” coupling is fitted with ‘O’ ring for gas tight sealing and stainless steel collet to hold the tube mechanically tight. The coupling is fitted with an anti-release circlip to prevent parts accidentally separating inside the pipe.

Huntingdon Fusion Techniques HFT® have a Worldwide Exclusive Distributor network, which can be found at www.huntingdonfusion.com