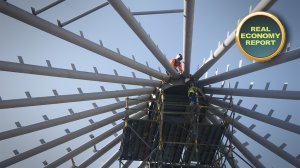 From Creamer Media in Johannesburg, this is the Real Economy Report. Providing capital growth fund Attacq with a 15-year project pipeline, the Waterfall City mixed-use development, in Midrand, has attracted a suite of corporates looking to consolidate their satellite centres into a single Gauteng foothold. Engineering News’s Natalie Greve recently explored the developing 2 200 hectare estate to chart its progress.

Attacq CEO Morné Wilken told journalists during a recent tour of the that the fund aimed to develop an integrated, mixed use development rather then encourage the construction of independent, stand-alone business headquarters.

Natalie Greve:
According to Wilken, companies relocating to the development cited its high visibility, central location, infrastructure and advanced architecture in Waterfall as key drivers of their decision.

Others pointed to the development’s location, which they felt provided a convenient springboard between Gauteng metropoles Johannesburg and Pretoria as well as the existence of the free-flowing Allandale offramp off the N1 highway, which mitigated traffic congestion challenges seen around other mixed-use developments.

Natalie Greve:
Waterfall City would be anchored by the 131 000 m2 Mall of Africa, which was due to open in April next year.

The Chamber of Mines has expressed optimism that the upcoming Mining Phakisa Laboratory, scheduled for October, will enable South African mining stakeholders to begin tackling prevailing impediments to mining and exploration investment and address issues undermining the competitiveness of the sector.