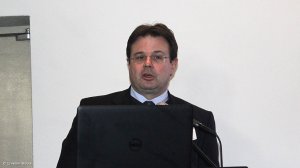 Stanlib economist Kevin Lings discusses the importance of the small business sector to the future of the South African economy. Video and editing: Darlene Creamer 31.5.2016

It is impossible for South Africa to be economically successful without a much bigger, more vibrant small business community.

It is an area of the economy that has huge potential to create many much-needed job opportunities, financial services provider Stanlib economist Kevin Lings told attendees at a small business seminar in Johannesburg on Tuesday.

He emphasised that the level of unemployment in South Africa was a significant challenge to ensuring sustainable development in the country.

Lings noted that South Africa’s unemployment rate was above 26%, which was well above the 10% level where most countries became “nervous” about the unemployment situation.

“We know that when developing countries’ unemployment rate is above 10%, this creates a number of problems including social unrest and increased crime levels,” he stated.

Lings declared that the biggest area of concern was the unemployment level among the youth – people under the age of 30.

He said that, according to Stanlib’s research, once someone had received their first employment opportunity it increased the likelihood of them retaining a job or finding a better opportunity.

“Once someone gains employment, even if it is for only one or two years and even if the job does not work out, they have much better chances of moving on to the next opportunity level,” Lings pointed out.

However, he highlighted that it was increasingly difficult for the youth to find that initial job because the education system in South Africa was not designed to deliver the sorts of skills sets the economy could use.

Therefore, Lings commented that people leaving high schools, technical colleges or even universities did not necessarily have the skills sets that business required.

Lings remarked that this would place South Africa’s youth unemployment level at one of the highest worldwide, which he warned did not bode well for the country’s social cohesion and stability in future.

He further pointed out that South Africans’ average age was 24, which should be viewed as a “massive opportunity” to establish a young, vibrant labour force; however, he lamented that this was not currently being used to the country’s advantage.

Moreover, he noted that only 17% of all students that enrolled for undergraduate degrees at institutions of higher learning actually graduated.

Lings said this indicated that university was perhaps not the right option for many South Africans and that other forms of educational institutions needed to be considered by high school leavers.

“Business does not just need university graduates, it also needs all the intermediate skills and this is an area where there is a large gap in South Africa.

“There needs to be a relook at the education that is offered at schools and what the educational needs of the country are to ensure they are in alignment,” he contended.

BUSINESS INSIGHT
Further, Lings pointed out that big businesses accounted for only 3% of all 742 000 of South Africa’s economically active companies. Therefore, he noted that the overwhelming majority of businesses in the country were either microenterprises or small businesses, which employed between 5 and 20 people on average.

Lings explained that big business was defined as any business that employed 200 or more people.

Further, he pointed out that 266 businesses paid 58% of all South African company taxes. “This tells us that the South African business sector is incredibly concentrated and this is not a healthy situation as it does not lead to the competition that you would ideally want.”

Lings stressed that it was very difficult to grow the economy and create more job opportunities when large amounts of capital vested with only a small number of big businesses.

“The answer is obviously to expand the small business sector as much as possible,” he stated.

He added, moreover, that government had to do a lot more to improve the ease of undertaking business activities in South Africa. “This is particularly crucial for small businesses as the larger businesses have the resources to overcome many of the bureaucratic challenges that they face, while small businesses simply do not.”

Additionally, Lings highlighted that general confidence levels in South Africa were currently “fairly low”. He explained that this was a challenge as economies generally did well when confidence levels were higher.

“I think that all sectors of society have a duty to address this challenge and it should not be a concern for government alone.

“For example, the local business sector can ensure that it invests locally as opposed to making offshore investments, labour unions can be more measured when they engage with companies and student protestors can avoid violent clashes and destruction of university property, as all these matters affect the country’s confidence levels,” he concluded.