Nothing comes before safe production – Sibanye-Stillwater

Nothing comes before safe production – Sibanye-Stillwater 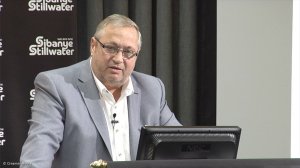 JOHANNESBURG (miningweekly.com) – Precious metals mining company Sibanye-Stillwater on Thursday spent the most part of its half-year presentation of financial results reiterating ongoing commitment to safe production and taking safety to the next level.

The Johannesburg- and New York-listed company, which reported 26%-higher earnings before interest, taxes, depreciation and amortisation (Ebitda) of R3.9-billion in the six months to June 30, drew on safety statistics going back to 2013 to show that the recent 12 gold mining fatalities suffered by the company contradicted an improving overall safety performance.

More than half of the fatalities were the result of two tragic incidents at the Driefontein and Kloof gold mines.

“Investigations are ongoing. We don’t have any outcomes yet from the Department of Mineral Resources. It’s also safe to say we have no surprises. As we’ve explained the accidents, that’s exactly what we’ve found,” said Froneman at the presentation covered by Creamer Media’s Mining Weekly Online.

Importantly, Beatrix gold mine in the Free State, which has been without a fatality since May last year, has achieved 2.5-million fatality-free shifts.

“So, if you sit there thinking that the entire organisation has a serious safety culture issue, I think Beatrix suggests that it doesn’t,” he added.

A safety performance diagram flash up on to a large screen showed Sibanye-Stillwater as being a safer gold producer over the last five years than its gold peers in the deep-level gold mining industry.

A similar diagram showed Sibanye’s safety performance in platinum to be on an ongoing improvement path.

Through engaged leadership, Sibanye-Stillwater is ensuring that its equipment, layouts and environmental conditions are conducive to safe, productive rock-breaking.

“That’s where it starts. If you get that wrong, you’re already on your back foot,” he said.

In addition, the company has made contributions to the University of the Witwatersrand (Wits) to progress safe technology.

Training is now more interactive with emphasis placed on employees being fully appraised of their right to withdraw from unsafe working environments.

As part of its commitment to world-class production systems,  the company is assembling a global safe production advisory board.

Bonus and performance incentives have been calibrated to drive safe work behaviour and anonymous reporting structures have been introduced to deal with intimidation.

A leading academic is reviewing risk management systems and a safety pledge has been signed following two safety summits in which unions, government  and management participated.

“These things are not new, but certainly, in a crisis like we’ve been in, they need to be reinforced,” Froneman added.

Sibanye-Stillwater currently employs 66 000 people, a number that will grow to 90 000 once the company takes over Lonmin Platinum, which is expected to take place in October, which, with multiplier effect, will make the company responsible for 2% of the population of South Africa.

To deliver added value to its employees and the communities, the company has invested more than R600-milion in seven initiatives. These initiatives include investment in agriculture, education, early childhood development, healthcare, brick manufacture and poverty alleviation.

More than 60 000 employees have been put through a programme of improving personal financial management. It has reduced overcharged garnishee orders by R1.4-million.

It has transferred 530 houses to employees and built 36 more.

“Our biggest constraint here is getting financial solutions for our employees. We really need financial institutions to come on board. We have the houses. They need to assist us in terms of ownership,” Froneman commented.

Employees have benefited from the awarding of training and development bursaries totalling R532-million.

It has introduced proactive health care through its primary health care clinics, which has resulted in the early detection of tuberculosis and a high retention of employees on HIV treatment.

It is also guiding upside from the new partnership it has concluded with surface gold mining company DRDGold, in which Sibanye-Stillwater now holds 38.05%.

Froneman made a point of restating a Tweet in which Mineral Resources Minister Gwede Mantashe urges the South African mining industry to begin talking positively about “our good industry” that makes things happen and boosts the local economy.

“South African mining has a bad name,” Mantashe Tweeted, “ because we are very loud about the negative and very quiet about the positive. We must begin to talk positively about mining”, the Minister urged.

The US PGM operations produced 293 959 oz at an AISC of $653/oz and the promising Blitz project remained ahead of schedule.

Production from the South African gold operations fell 7% to 18 616 kg (598 500 oz) with AISC was 7% higher at R520 488/kg ($1 315/oz), with operational recovery at the Beatrix mine in the Free State and the Kloof mine in the North West. The Driefontein gold mine remains impacted by seismic damage to footwall infrastructure.

“I’m confident that collaboration with key stakeholders will have a significant impact on safety at our mines. Restoring and then improving the safety performance at our operations globally, remains a priority, said Froneman.