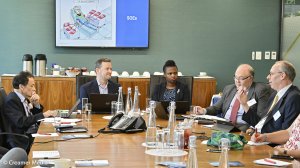 The upcoming National Budget is likely to be a “watershed moment” for South Africa, accounting and consulting group Mazars tax partner Bernard Sacks said on Tuesday.

Speaking to media at a pre-Budget briefing, he said the Budget itself would, however, not be a “watershed Budget”.

Instead, Sacks anticipates the Budget, scheduled to be delivered on February 26, to “be the opposite of fiscal stimulus”, saying Finance Minister Tito Mboweni faces a daunting task in trying “to balance the country’s books”.

This is of particular importance, he noted, especially as the country’s economy is balancing on the edge of a cliff in relation to the need for a stimulated economy and growth improvement, alongside an appetite – within government, the private and public sectors too – to resolve and fix the challenges embattling South Africa.

“There is no silver bullet,” Sacks lamented, emphasising that South Africa is in critical need of decisiveness in several areas, including regarding the National Growth Plan. Implementation of the growth plan has, so far, been lagging, but Sacks is hopeful more clarity on this will be delivered later this month.

These sentiments were shared by Mazars advisory services partner Bongiwe Mbunge on Tuesday as she reiterated that while South Africa has “world class policy and legislation”, implementation thereof hinges on “understanding the intent and the appetite to implement”.

This, in turn, is dependent on skills, which circles back to the country’s education and training woes.

“South Africa has begun tapping into the resistance factor,” she lamented, highlighting the increase in hate crimes, lack of diversity tolerance and increasing racism as issues exacerbating the country’s difficult position.

Instead, she suggested that South Africa “needs a different kind of thinking to take [the country] forward,” adding that in initiatives thus far, leadership and direction have been neglected.

While power utility Eskom is “not a new problem”, Sacks indicated that “an objective team, unhindered by politics, could lead to South Africa reaping the benefits” of a working and stable power supply system.

According to Sacks, if newly appointed Eskom CEO Andre de Ruyter is able to continue effectively dealing with the issues facing the utility, without government or union interference, then South Africa may see a silver lining following the forecasted 18 months of load-shedding.

However, with load-shedding affecting every South African citizen and business, people have started turning towards alternative power generation options, which Mbunge said “could unlock an opportunity for clean energy”.

The country may experience growing pains in getting to this point, she noted, but in the long-term, the opportunity could see skills being cultivated locally to “take South Africa where it needs to be”.

Sacks meanwhile suggested that for the medium-term, the upcoming Budget should reduce corporate taxes in an effort to encourage foreign direct investment (FDI), which would help to reduce the country’s rising unemployment levels and contribute to improved skills transfer.

Corporate South Africa is hesitant to invest in South Africa owing to too much “red tape” for business, and a lack of confidence in the economy. The Budget needs to kickstart action and implementation, Sacks said, lamenting that “this is not happening at the moment”.

Further, Mazars taxation national head Mike Teuchert told media that the 2020 Budget is likely to implement no, or limited, inflationary adjustments to income tax brackets, alongside sin tax and fuel levy increases, “as has been the case every year”.

The likelihood of another value-added tax increase is a bit more uncertain, especially as Teuchert considers this move, even if it is only a one or two percentage point increase, “to be regressive” as it would impact struggling and poor citizens even more.

Increases in capital gains tax inclusion rates for individuals and/or companies, as well as the removal of tax incentives, are likely to happen following Mboweni’s speech.