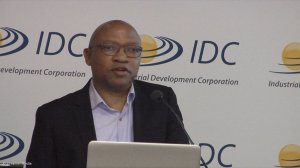 Speaking at the Black Business Council’s (BBC’s) Access to Funding Series engagement with the IDC, in Johannesburg, he pointed out that there were a number of challenges it had to contend with and objectives it had to adhere to, which could make it harder to fund black industrialists.

Nchocho noted that the IDC only accounted for a small portion of investment funding in the country, compared with the four major banks.

Therefore, he indicated that, from a strategy perspective, businesses had to approach the IDC and other sources for funding.

Nchocho said that, contrary to the perception that it did not assist black businesses, the IDC had recorded a number of achievements in this regard over the past few years.

He stated that the IDC’s contribution to expanding, growing and making the domestic economy more inclusive had been considerable.

However, he noted that, in the past financial year specifically, the persistent sluggish economic environment had resulted in some of its financing and development outcomes falling short of the successes achieved in the preceding years.

Last year, R6-billion in funding had been approved for black industrialists, which constitutes 46% of total funding for that period.

Moreover, as per its mandate of targeting women-owned businesses, for the last financial year, about R3-billion in funding was approved, which Nchocho noted was a 37% increase year-on-year.

Moreover, the IDC was ahead of its five-year funding target for women-owned business.

Another target area for the IDC was youth-owned businesses. Nchocho indicated that last year, about R823-million had been approved in this regard and that, for the five-year period, the IDC invested about R5.2-billion cumulatively, ahead of its target of R4.5-billion.

Nchocho said that, as the IDC invests in these business, a secondary beneficial outcome is that of job creation, or jobs saved.

While Nchocho said that these examples showcased the IDC’s good record in funding black industrialists, he noted that its funding model did have limitations.

The IDC’s funding comes from three sources, mainly, as a profit-making entity, from internally generated cash from investments; from dividend receipts; and from approaching capital markets.

The IDC does not receive funding from the fiscus, therefore, it has to manage its operations on a sustainable budget, Nchocho emphasised.

This funding formula therefore imposes on the IDC that it must undertake its operations sustainability, he indicated, because if it starts losing money progressively, its funding capacity will be eroded.

The IDC also has to contend with difficulties presented by the global economy and trade tensions, as well as the South Africa economy, and must take consideration of this in its funding activities.

Nchocho also mentioned that the IDC has experienced some common challenges when funding black businesses over the years.

This includes the issues of capital structure, where some clients do not normally have enough, resulting in the IDC providing expensive equity and reducing the possibility of a return for the entrepreneur.

Also, he noted the issue of a lack of active participation in IDC funded ventures by the business owners, owing to multiple interests, which increases the IDC risk.

Also, the new accounting standard of IFRS 9 has amplified the risk of low security cover through higher impairments.

There is also the issue of market risk, with some projects or transactions relying heavily on one or a few contracts, which poses a sustainability risk should market dynamics change.

Another issues is management capacity, where lack of expertise or technical partners tends to erode the competitiveness and viability of the business.

Nchocho also touched on the areas of improvement that the IDC had to pursue moving forward.

Firstly, he indicated that its rest of Africa portfolio had not been performing optimally and would have to be reviewed to ensure it became profitable.

Other areas of improvement include project implementation, short termism, pricing and customer appreciation.