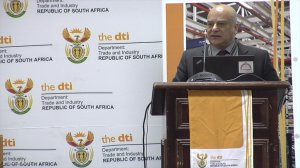 Phase 2 agreements under the African Continental Free Trade Agreement (AfCFTA) are expected to be finalised by January 2021, the Department of Trade, Industry and Competition (DTIC) says.

The Phase 2 agreements will deal with investment, intellectual property and competition issues.

Phase 1 of the AfCFTA will be finalised early next year, and entails negotiations among member States on goods and services, including negotiations around tariff setting and rules of origin.

The DTIC expects trade under the AfCFTA to start by July 2020.

The department on Wednesday hosted a dialogue between stakeholders on the AfCFTA and unpacked the intra-trade agreement’s opportunities and challenges.

DTIC international trade and economic development deputy director-general Xavier Carim said African integration had been a longstanding continental objective, starting initially with the Lagos Plan of Action in 1980, which formalised the continental integration agenda under the Organisation of African Unity.

AfCFTA member countries are in the process of adopting modalities for tariff liberation and trade, as well as rules of origin on products.

The AfCFTA targets 90% of the scheduled tariffs of participating members being liberalised to zero over five years. The tariff phase-down will happen in equal installments. For example, South Africa is cutting about 20% of its tariffs each year over five years.

An additional 7% of sensitive tariff lines will be liberalised over ten years, and 3% of tariff lines can be excluded. The deadline for reduction of tariffs is July 1, 2020.

South Africa has developed a draft tariff offer that is based on consultations and inputs received by business and labour in the National Economic Development and Labour Council. The offer takes into account import penetration, potential productive capacities and the need for reciprocity in the country’s areas of export interest.

So far, South Africa has offered to phase down 87% of its scheduled tariffs, meaning it is still working towards the threshold of 90%. At the AU Trade Ministers meeting in December, final tariff schedules should be endorsed.

Carim noted that South Africa had not yet developed a clear process to set objectives for trade in services; however, it had determined five priority sectors in the first round of negotiations in services, including communications, transport, financial, tourism and business services.

INTEGRATION BENEFITS
“Integration is essential to overcome the limitations of small, fragmented economies that were established under colonialism.

“We recognise that the major barrier to intra-regional trade is not tariffs necessarily, but constraints in the real economy, including under-developed production structures and inadequate infrastructure that links African countries,” said Carim.

He noted that trade integration therefore had to be part of a broader strategy that addressed infrastructure backlogs and promoted economic diversification, particularly through industrial development.

The AfCFTA aims to enhance intra-Africa trade and investment, harmonising regimes for trade in goods and services. The agreement takes into consideration the different levels of development in respective countries.

Some of the existing trade agreements include, for example, the Tripartite Free Trade Area agreement between the Southern African Development Community, Common Market for Eastern and Southern Africa and the East African Community.

“The agreement will facilitate cooperation on customers, trade facilitation and transit [between member countries], while enhancing cooperation on technical barriers to trade and sanitary and phytosanitary measures.

“The agreement should also enhance legal certainty and predictability of market access and establish due process in resolution of trade disputes. The AfCFTA can stimulate Africa’s industrial development and employment, as well as enhance investor confidence in Africa,” he explained.

“Few countries in Africa are large enough to compete in the world economy on their own, including South Africa.”

He mentioned that the majority of trade in most African countries happened in an informal manner.

Ismail further said that the AfCFTA, going forward, needed to consider how informal traders could be incorporated in the rules in a special manner that took their circumstances into account.

The country accounted for about 23% of intra-Africa trade in 2018, making up the largest share of trade at a value of R515-billion, compared with R478-billion in 2017.

Carim said the AfCFTA presented an opportunity for expansion to new markets in West and North Africa, notably in value-added products.

Ismail said South Africa’s economic prospects had become increasingly intertwined with those of the rest of the African continent.

Africa is forecast to remain the second-fastest growing region in the world and, therefore, the growing number of relatively wealthy consumers in sub-Saharan Africa will become a key source of demand for South African manufactured goods.

Despite recent shocks and challenges, Africa’s household consumption and business are both growing strongly, offering companies a $5.6-million opportunity by 2025.

Household spending in Africa had grown steadily to reach $1.6-trillion last year after crossing the $1-trillion mark in 2010. Household spending is projected to hit $2.5-trillion by 2025, according to estimates by McKinsey Global Institute. This creates new export markets for South Africa.