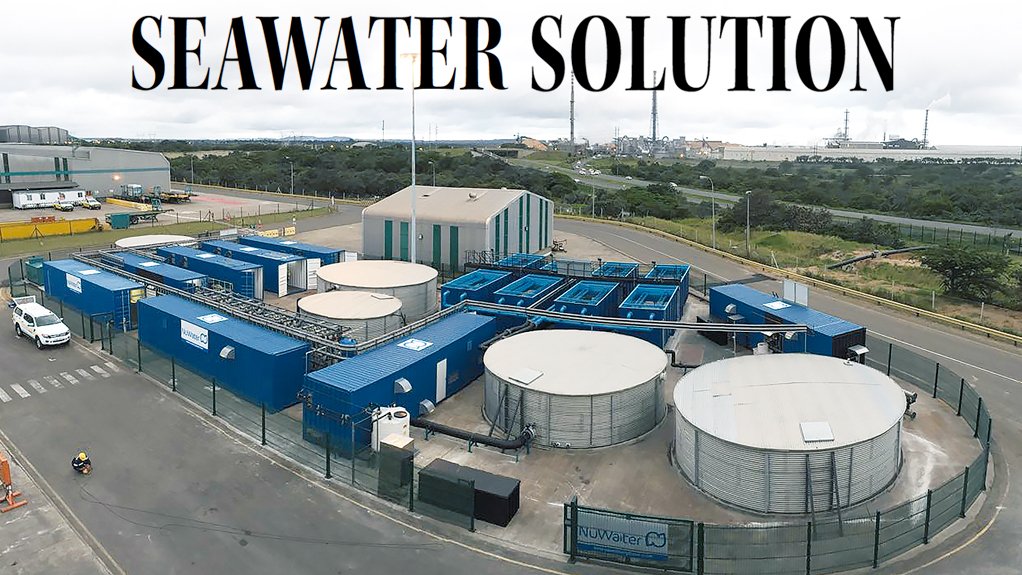 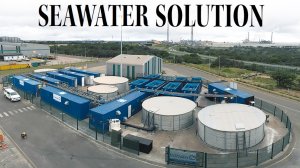 The diversified miner appointed engineering and environmental consultancy JG Afrika the principal agent for the project, initially tasking it with investigating water-saving techniques to reduce the average 1.5 Mℓ/d water demand at Hillside.

The plant, launched in October, is a first for KwaZulu-Natal and was developed by global water treatment company NuWater in response to the drought affecting Richards Bay, which has resulted in Level 4 water restrictions for businesses and residents since March. Level 4 is the highest restriction level, and the restrictions currently in place have resulted in consumption cutbacks of up to 50%.

According to a Department of Water and Sanitation media statement released in August, the Goedertrouw dam, the primary water source for Richards Bay, stood at less than 19% of its capacity.

South32 Africa president Mike Fraser pointed out at the launch of the desalination plant that the Hillside smelter played an important role in the socioeconomic landscape of KwaZulu-Natal, accounting for about 10% of the gross domestic product of the province and contributing to the livelihoods of an estimated 80 000 South Africans. “Availability and certainty of critical input variables, such as water and power, are key to the smelter’s sustainability.”

He highlighted South32’s responsibility to keep the smelter “viable and internationally competitive when many input costs are externally controlled”. Fraser noted that, should South Africa lose its primary aluminium industry, it would need to import the metal at a yearly cost of about R4.1-billion.

“A recent McKinsey study demonstrated that, with support from government, it is possible to double the size of the downstream industry in ten years,” said Fraser, adding that this would have a positive impact on job creation and economic growth for the country and for KwaZulu-Natal, in particular.

He explained that the company, “recognising the issues the drought was creating”, started investigating solutions that would ensure that consistent water supply to the Hillside operation was maintained, reducing reliance on municipal water supply.

He explains that it was necessary to reject about 0.5 Mℓ/d to the marine outfall as wastewater and then introduce potable water to dilute the salt content generated during the cooling process to reduce the conductivity of the water and ensure the effectiveness of the cooling process.

Bromley explains that South32 initially considered using a reverse-osmosis (RO) plant dedicated to treating the 0.5 Mℓ/d of wastewater to reduce its potable water consumption. However, the pervasive drought conditions would have made an RO plant meaningless, as the supply of 1.5 Mℓ/d to maintain Hillside’s operations continued to be a necessity.

Consequently, South32 decided that alternative supply options had to be considered. A seawater desalination plant was preferred, “as it will not only provide a reliable water supply to the operations, but also . . . relieve the strain on the municipal water system by up to [2 Mℓ/d]”, Fraser noted.

South32’s Richards Bay Hillside smelter lies 1.5 km from the decommissioned Bayside smelter, which has a historic abstraction licence to extract a large amount of seawater from the Manzamnyama canal for cooling applications.

The Bayside smelter was decommissioned in June 2014 by its previous owner, diversified mining major BHP Billiton. The Bayside casthouse, which supplies liquid aluminium, was sold in November 2014 by South32 to the Isizinda Aluminium consortium, which comprises black economic-empowerment group Bingelela Capital, with a 60% shareholding, and aluminium manufacturer Hulamin, with 40%.

Initially, South32 aimed to extract water from a decommissioned pump sump adjacent to the Manzamnyama canal. However, because of the tidal forces and sediment deposition in the canal over many years, the company was not going to have a consistent water supply unless the canal was dredged to mitigate the effect of the tides. However, dredging was deemed too harmful to the environment, owing to the presence of protected mangrove trees and the delicate aquatic ecosystem in the area.

It was later discovered that nearby phosphate and phosphoric acid producer Foskor had its own seawater abstraction infrastructure in the Richards Bay harbour, including a twin pump sump; however, only one pump had been installed. Subsequently, the design team “ditched the dredging plan” and met with Foskor to discuss sharing its infrastructure in the harbour, Bromley notes.

Foskor, he explains, normally uses effluent water supplied by international packaging and paper company Mondi in its processes. However, Mondi has occasional shutdowns that require Foskor to supplement its water needs using the seawater abstraction infrastructure.

The extraction point of the infrastructure is designed for a capacity of 1250 m3/h. Foskor’s estimated demand for seawater is about 700 m3/h, which makes a partnership with South32 to deliver 280 m3/h to Hillside a viable option, while remaining within the current approved limit of 1 250 m3/h.

Bromley explains that the balance of 270 m3/h is not used at this stage; however, the additional hydraulic capacity of the raw water pipeline can accommodate higher flows should the need arise. Further, more RO units can be added to the current module, which could be integrated into the municipal system.

Foskor’s own raw water pipeline is elevated and runs from the harbour to the Foskor plant. At one location, the pipeline is about 10 m from South32’s elevated alumina powder conveyor system.

He says that, by running the pipe inside the conveyor, the construction requirements for the project were significantly reduced and, as the conveyor system runs adjacent to an existing wetland, the company avoided significant potential environmental impacts and the approval that would have been required if a conventional buried pipeline option had been chosen.

The raw water pipeline route was identified, designed, constructed and commissioned in 24 weeks.

“We had to be innovative and use existing infrastructure and construction techniques because there was no time to build new concrete structures,” Bromley asserts.

Another challenge during the project was the disposal of brine water in an environmentally responsible way.

South32 owns a 1.5-km-long pipeline, which was used in the past to supply raw water to the Bayside smelter from Mzingazi Lake, in Richards Bay. “The pipeline was used periodically by South32 to transfer water between the Bayside and Hillside smelters in the event of supply constraints,” Bromley says.

To safely dispose of the brine generated at Hillside, the project team cross-connected the desalination plant to the 1.5-km-long pipe to Bayside, where there is a connection into the marine outfall pipeline owned and operated by local water utility Mhlathuze Water.

“We took about 1.5 km of existing pipeline, reconnected and remobilised it, built a short extension and a pipe bridge, and then connected where Bayside had a connection into the Mhlathuze Water outfall,” Bromley explains.

The project’s tight schedule, aimed at avoiding operational downtime, owing to water constraints at Hillside, and accommodating operational requirements at Foskor, was one of the most challenging aspects of the project, he says, adding that the project turned out to be “a perfect fit”, as the various “puzzle pieces aligned excellently”, allowing existing infrastructure to be used to convey seawater and safely discharge brine.

“What was notable was how the industrial community in Richards Bay and the local and provincial governments cooperated with [us on] the project. Everybody pulled together and all these little pieces of the puzzle came together,” says Bromley.

The project was conceptualised in February and construction started on site in April, taking about 32 weeks to complete. First water was pumped into the plant in September.