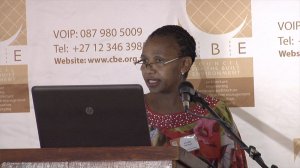 CBE CEO Priscilla Mdlalose talks about how transformation in the built environment has not progressed as fast as needed. Video: Kutlwano Matlala; Editing: Nicholas Boyd.

Council for Built Environment (CBE) acting chairperson Maphefo Mogodi says the built environment industry is plagued by barriers to transformation and that government and industry have not done enough to change the situation.

“The inability of small and medium businesses to prosper economically in the built environment, poor implementation of policies and lack of policy reforms have contributed to the slow transformation of the sector.”

CBE is hosting its third national Transformation Indaba, in Pretoria, this week, under the theme “Breaking the Barriers” relating to economic transformation and job creation.

Participants at Wednesday's gathering discussed various regulatory barriers, which had led to the exclusion of smaller service providers in projects.

Delegates also discussed retaining registered professionals and the CBE skills pipeline model, which guides transformation dialogues and interventions by the sector, based on the career value chain.

CBE CEO Priscilla Mdlalose said that the number of previously disadvantaged individuals registered as professionals across the country was low, averaging 27%, while females averaged 11% representation.

“Legislation such as the Preferential Procurement Policy Framework Act and the Broad-Based Black Economic Empowerment Act, which were created to redress the imbalances of the past have not yet yielded desired outcomes for built environment professionals.”

Further, Mdlalose said the Councils for Built Environment Professions, particularly those with low registration numbers, were experiencing challenges to implement their legislative mandate as they did not generate sufficient revenue from registration fees to sustain themselves.

Non-compulsory registration for persons practicing in the built environment contributes to low registration numbers and posed a challenge in the regulation of professionals. Mdlalose further noted that a lack of enforcement of identification of work for the professions had resulted in professionals operating in an unregulated environment.

Mdlalose suggested that collaboration was key to make the built environment work for disadvantaged professionals, along with improved management of stakeholder engagement, to which end CBE would be launching an integrated electronic built environment system.

Meanwhile, Mdlalose mentioned that a roster system for the built environment, introduced by the then Department of Public Works a while back, should have enabled black companies to be considered first for contracting. The roster also required developers to appoint at least three emerging businesses and one established business for projects over a certain value.

“However, we found that the course of implementation changed along the way.”

She said that today, the country had an untransformed construction sector and built environment industry, claiming there was never an intention to implement the policies that were set to transform the industry.

Gauteng Infrastructure Development and Property Management MEC Tasneem Motara agreed, stating that some progress has been made in the 25 years of South Africa’s democracy, but the built environment remained untransformed.

“With many barriers to entry, including optimal functioning of the regulatory environment, service providers from disadvantaged communities had been disadvantaged by regulations. We must use the tools at our disposal to enable these professionals and industry to transform. Change can occur in aspects including structure, culture, products and services, or simply doing things differently,” she said.

Motara added that the construction sector remained male-dominated, with 89% of registered professionals being male.

“Legislation is not supposed to take back development, but rather enable development and transformation. Once we come up with solutions, it must free the struggles of small businesses, which are relied upon to create jobs and grow the economy.”