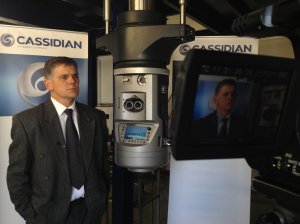 The South African arm of GermanY-based defence and security group Cassidian has designed and manufactured what it describes as the world’s most modern submarine periscope in its class, at its purpose-built facility in Irene, Centurion.

The subsidiary, formerly known as Carl Zeiss Optronics, recently completed the first new SERO 250 system and will fill orders for nine more in 2013. The company had, since 2001, assembled and integrated over 25 periscopes on submarines across the globe.

Viljoen added that it was not only the local design and manufacture of the system that was notable, but also the fact that the company had committed to extensive localisation during manufacturing and invested an average of 10% of yearly turnover back into the company through training programmes and self-funded research and development (R&D).

“In 2013, our R&D spend will be over R70-million, which demonstrates our commitment to enhancing and expanding local manufacturing capabilities and the South African skills base,” he commented during a media tour on Tuesday.

Viljoen said that, while over 90% of the company’s revenue was earned in the foreign market, over 70% of this was spent locally, with the majority of components manufactured in-house.

“We earn foreign exchange, and spend rands,” he said, adding that the development of the SERO 250 system had been fully funded by its German parent company.

The assembly process of the 12-m-tall periscopes, which took between nine and twelve months, was conducted in a succession of “clean rooms” at Cassidian’s local facility, where the highly polished glass-optics were fitted into the periscope tube in a controlled manufacturing environment.

The 850 kg periscope, which had a lifespan of some 30 years, was then moved to a tower for final testing and calibration, before being shipped to international clients.

While the systems were largely standardised, the nature of the optical design catered for alternations as requested by various international clients.

Viljoen emphasised that the local facility was one of only five global manufacturing centres with the intellectual and funding capacity to develop high-performance periscope systems.

“Because the market is quite small, not many companies have the confidence to invest between R20-million and R40-million into a development like this, which is why we have competitive advantage,” he commented.

These included helmet-mounted display and sighting systems for pilots, on which all flight and mission data could be projected, including airspeed and altitude.