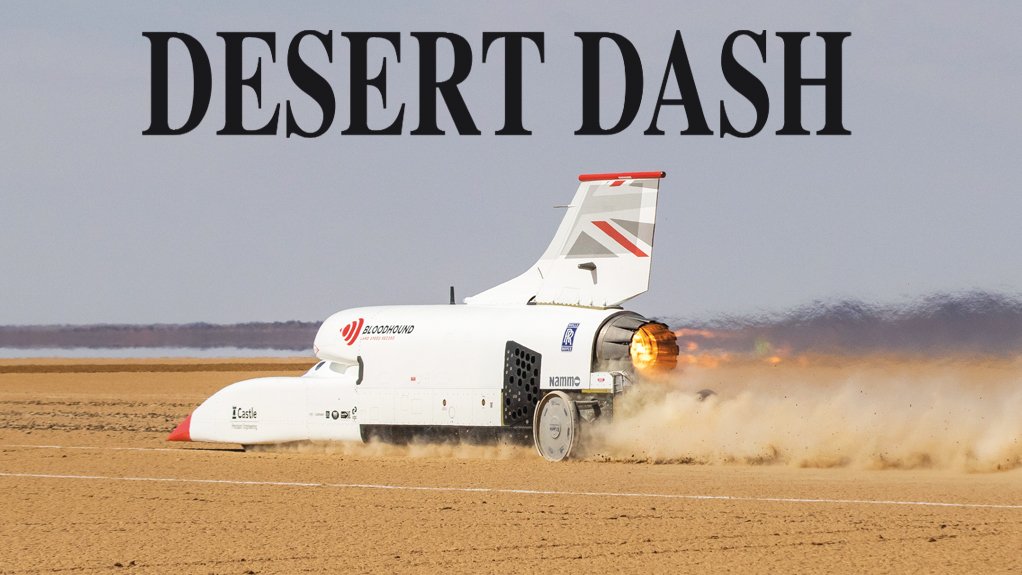 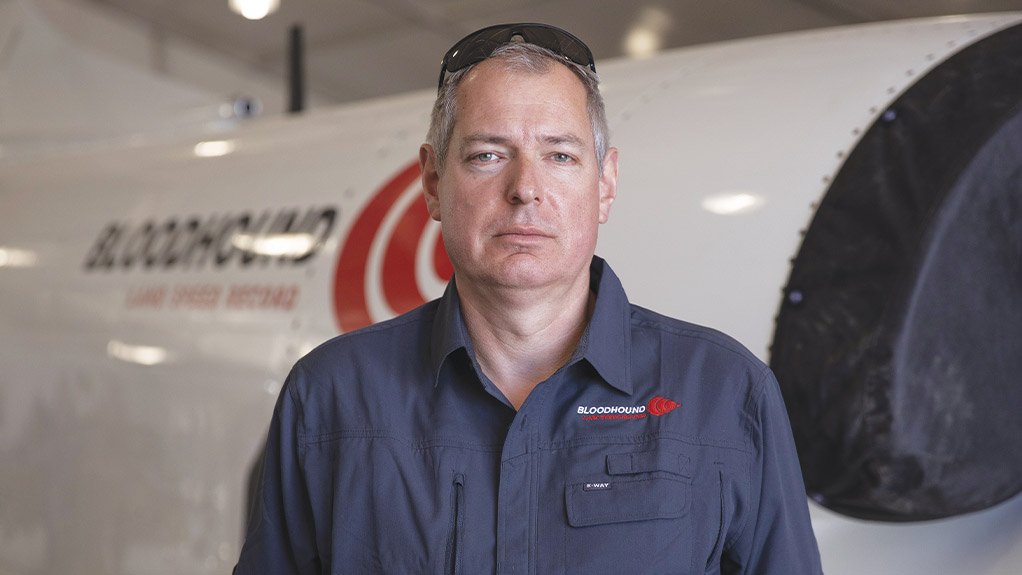 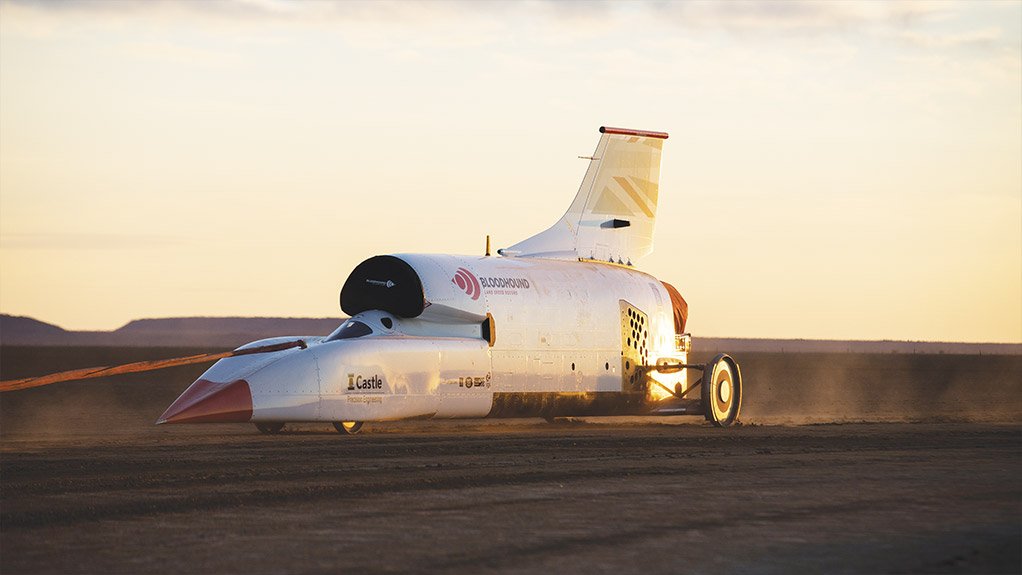 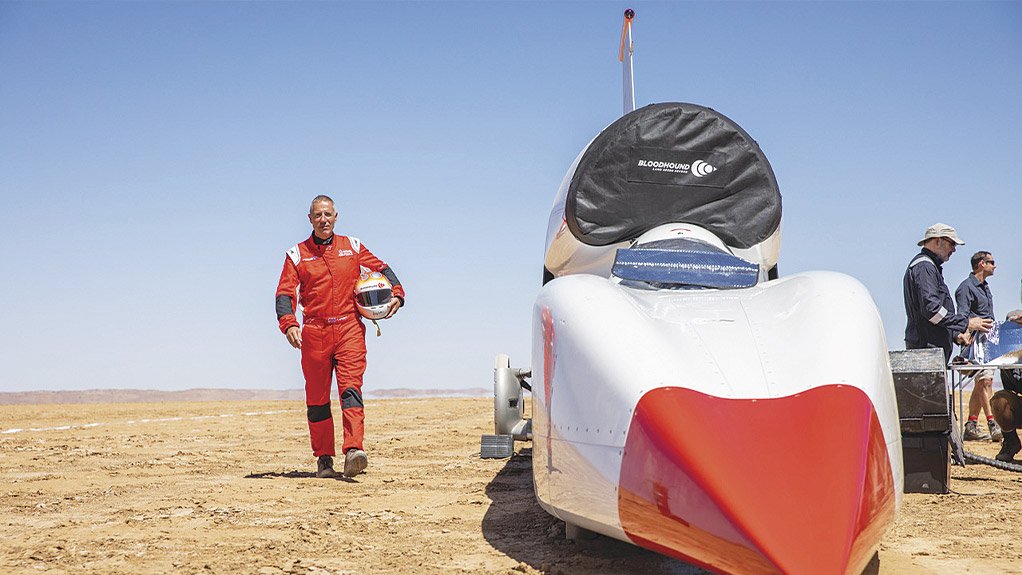 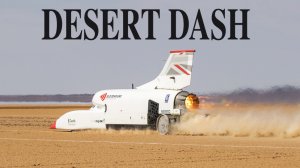 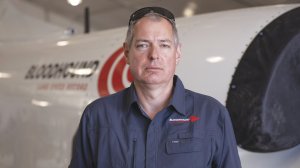 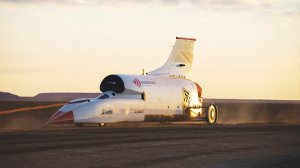 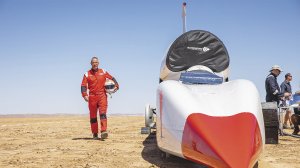 MARK CHAPMAN Every day, there is a different, unique problem to solve
Photo by Charlie Sperring
ONE SMALL STEP . . . The 2019 test runs focused on everything related to the desert, such as how the Bloodhound’s wheels interacted with the surface
Photo by Charlie Sperring
ANDY GREEN The Royal Air Force fighter pilot will again pilot the Bloodhound in 2021

Dusty Hakskeenpan, in the Kalahari desert, is not exactly the place one expects a bunch of Brits to hang around during a hot African summer. It is 260 km from the nearest big town – Upington – and average daytime temperatures hover somewhere in the midthirties, if not higher.

But the men and women who started to descend on one of the world’s flattest surfaces from October onwards were not ordinary tourists. They were here as part of a hunt to set a new land-speed record.

The current record is a blistering 1 227.9 km/h, notched up in 1997 by another UK team, led by Richard Noble, in a car driven by Andy Green.

Jump 22 years into the future and the aim is a mind-boggling 1 600 km/h – fast enough to outsprint a bullet.

Achieving this speed was not on the cards for 2019. The year’s activities at Hakskeenpan’s 16-km-long-track – wrapping up at the end of November – were all about gathering information, testing equipment and getting a feel for how the Bloodhound supersonic car interacted with the desert surface and the climate, managing a very respectable maximum speed of 1 010 km/h while doing so.

The real fun stuff is set to happen sometime in the next 12 to 18 months, when Green, a Royal Air Force fighter pilot, again gets behind the wheel to see if he can clock that magical number that will break his own global land-speed record.

From Screen to Desert The Bloodhound has been more than a decade in the making. It has been a theoretical model on a computer screen for quite a number of years before it finally came to life in the UK and, ultimately, also on Hakskeenpan.

“Coming up to South Africa was about testing all the stuff we couldn’t test in the UK,” Bloodhound chief engineer Mark Chapman tells Engineering News.

“We came out here to plot out some still unknown points on the curve.”

This included everything related to the desert, such as how the wheels interacted with the surface.

The Bloodhound’s solid aluminium wheels have been specially designed for the desert surface.

They were created by an international consortium and forged from one of the highest aircraft-grade aluminium alloys in the world – 7037.

The wheels have a V-shaped keel that digs into the baked mud surface up to 15 mm when the car is stationary.

As speeds increase, the wheels rise up, out of the mud surface, and plane in much the same way as a speedboat rides up on the surface of the water.

At 804 km/h and above, just a few millimetres of metal are in contact with the desert surface, and the giant aluminium discs act more like rudders than the wheels of a conventional car.

The impact of ambient temperature is another factor that required some investigation.

“It was your summer, and it was getting hotter and hotter, so it was very different from the UK. Jet engines deliver less power at altitude, as well as at high temperatures.”

Of course, being at Hakspeenpan for more than a month, another challenge was to see how the Bloodhound operates at speed, as the car could really only stretch its legs once here in South Africa.

“In the UK, we were limited to around 320 km/h, just because of the length of the track we could run on,” explains Chapman.

Surprise, Surprise As far as temperature and altitude were concerned, the biggest surprise was that the Bloodhound’s jet engine had to be started with another jet engine, says Chapman.

The air-start cart used at Hakskeenpan is a small jet engine that blew high-pressure air into the Bloodhound’s gear box, which, in turn, spun the EJ200 jet up to a speed ready for ignition.

“The jet engine we have was fine in the UK, but here it was on the edge of delivering power,” notes Chapman. “This was something we were kind of expecting – we knew it would have reduced power – but it wasn’t something we really took into account.”

This particular challenge was partially caused by the heat, and will probably ensure that the Bloodhound does not attempt to break the land-speed record this time next year, but rather in the winter months – June or July.

“Our aim has always been to run in winter, because colder temperatures mean you get more power out of the jet engine,” says Chapman.

“We didn’t really need a lot of power this year (2019). We weren’t looking for maximum power. Speed wasn’t the main thing. It was more about testing the systems.”

Chapman says there is about a year’s work ahead for the Bloodhound team as it moves from this year’s testing, maxing out at 1 010 km/h, to 1 600 km/h, making the winter of 2020 an unlikely time slot for a record attempt.

Although the car ran “pretty much flawlessly”, it did not yet have the rocket system on it.

At the formal record speed attempt, the Bloodhound will use three power plants: the current Rolls-Royce EJ200 jet from a Eurofighter Typhoon, a cluster of Nammo hybrid rockets, and a 550 bhp supercharged Jaguar V8 engine that drives the rocket oxidiser pump.

Between them, they will generate 135 000 thrust horsepower, equivalent to 180 Formula 1 cars.

Fitting the rocket system will be another eight to ten months’ work, says Chapman.

“This becomes a lot easier if the ambient temperature is cool anyway, as you have to do less work to chill it.”

Harmful Dust “Our calculations about how far the wheels would sink into the desert have been verified,” says Chapman.

What was, however, quite surprising was the amount of energy in the dust that came off the front wheels. “We have these two deltas around the rear suspensions. During the third run, when we went close to 700 km/h, they got damaged,” he says.

“It looked like the aerodynamic force peeled them back, but it wasn’t that. They were basically being pummelled by a 10 cm band of dust that comes off the front wheels.

“We did some repairs and ran it past 800 km/h with success.

“When we come back we’ll look at how to reinforce that area.

Crosswinds The Bloodhound team has set an operational limit of about 16 km/h for crosswinds blowing across the track, as the car has a “very large fin on it that helps with operational stability”, says Chapman.

Part of the raft of tests at Hakskeenpan in 2019 included “exploring that crosswind limit”.

“We deliberately ran the car in some high crosswinds so Andy could get a feeling for what’s too much, and, yes, we’ve had to revise some numbers.”

Chapman notes, however, that the difference between this year and the formal attempt at the land-speed record is that the centre of gravity will be in a slightly different position once the rocket and rocket oxidiser have been mounted.

“The numbers we’ll be doing when we get back to the UK have to do with changing the modelling and seeing where we are, and [seeing] if we have to make any adjustment to the centre of gravity to ensure the car’s stability.”

Slowing Down The 2019 Hakskeenpan runs were not all focused on acceleration, but also took an in-depth look at stopping the 6.5 t beast safely.

Breaking the Bloodhound requires parachutes and airbrakes, among other methods.

Chapman and the Bloodhound team used the time at Hakskeenpan to sort out a few problems around the parachute mechanism.

“The first parachutes we used were a standard design and tended to bounce to the left and to the right,” explains Chapman. “It tried to steer the car a bit. We then modified the parachute so that it flew straight and this solved the problem.

“It was trial and error when we were doing these test runs,” adds Chapman. “On every single run, we were trying a number of different things, so that, when we come back for the land-speed record, we’ll have a lot of knowledge built into the car.”

The good news about spending weeks under the hot South African desert sun is that the Bloodhound does not have to go back to the drawing board.

Its 1 010 km/h run has already reserved the vehicle a spot among the ten fastest cars in the world for all time.

“The car weathered the testing well,” says a pleased Chapman. “I expected to see some more damage. We put anti- erosion liners on the wheel arches, for example, and they show no damage at all. This is something we thought would be pummelled.

“The next time we come out, it would be for the record run. This could be during this time next year, but more likely during May or June 2021.”

Problem Solver The best part of his job, says Chapman, who has been with the Bloodhound project for 12 years, is the consistent challenge of solving problems no-one else has tried to solve before.

“Every day, there is a different, unique problem to solve. There is always something new and something unexpected happening.

“We had a few problems out there on Hakskeenpan, but you are a very long way from home, so you have to be versatile and pragmatic about how you solve these problems.

“That, as an engineer, is fantastic. There is nothing better.”

Another plus for Chapman is that he is allowed and, indeed, encouraged, to share the details of the project as widely as possible.

“What I also love about this project is that I can talk about it. At a lot of companies, you are not allowed to discuss what you do, but the purpose of this project is to be very open. That is quite refreshing.”