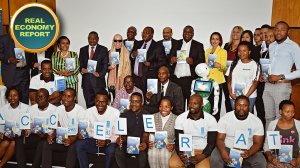 In an effort to provide a network and platform through which new solutions can be developed to mitigate and solve the country’s challenges, the United Nations Development Programme has launched its 60th Accelerator Lab in South Africa. Journalist Simone Liedtke attended the launch event last month.

According to UN resident coordinator Nardos Bekele-Thomas, the UNDP’s “flagship programme” seeks to implement a new way of working together in development and is also the UNDP’s way of redoubling its efforts to ensure an accelerated pace to achieving the Sustainable Development Goals – or SDGs – by 2030.

In his keynote address at the launch, Higher Education, Science and Innovation Minister Dr Blade Nzimande cited the lab’s launch as a “timely intervention” in South Africa’s innovation journey.

The Minister also expressed his support of the Accelerator Lab, and said that through the use thereof, will assist his department in finding effective ways of assisting South Africa in building a post-school education and training foundation.

Delegates also got an opportunity to see South Africa’s first humanoid robot, named Pepper, in action at the launch event as she quickly moderated a Q&A session. The robot is a prime example of what innovation and technology can achieve.

Mineral Resources and Energy Minister Gwede Mantashe has assured mining companies in South Africa they will be able to generate their own energy to counter severe energy constraints.